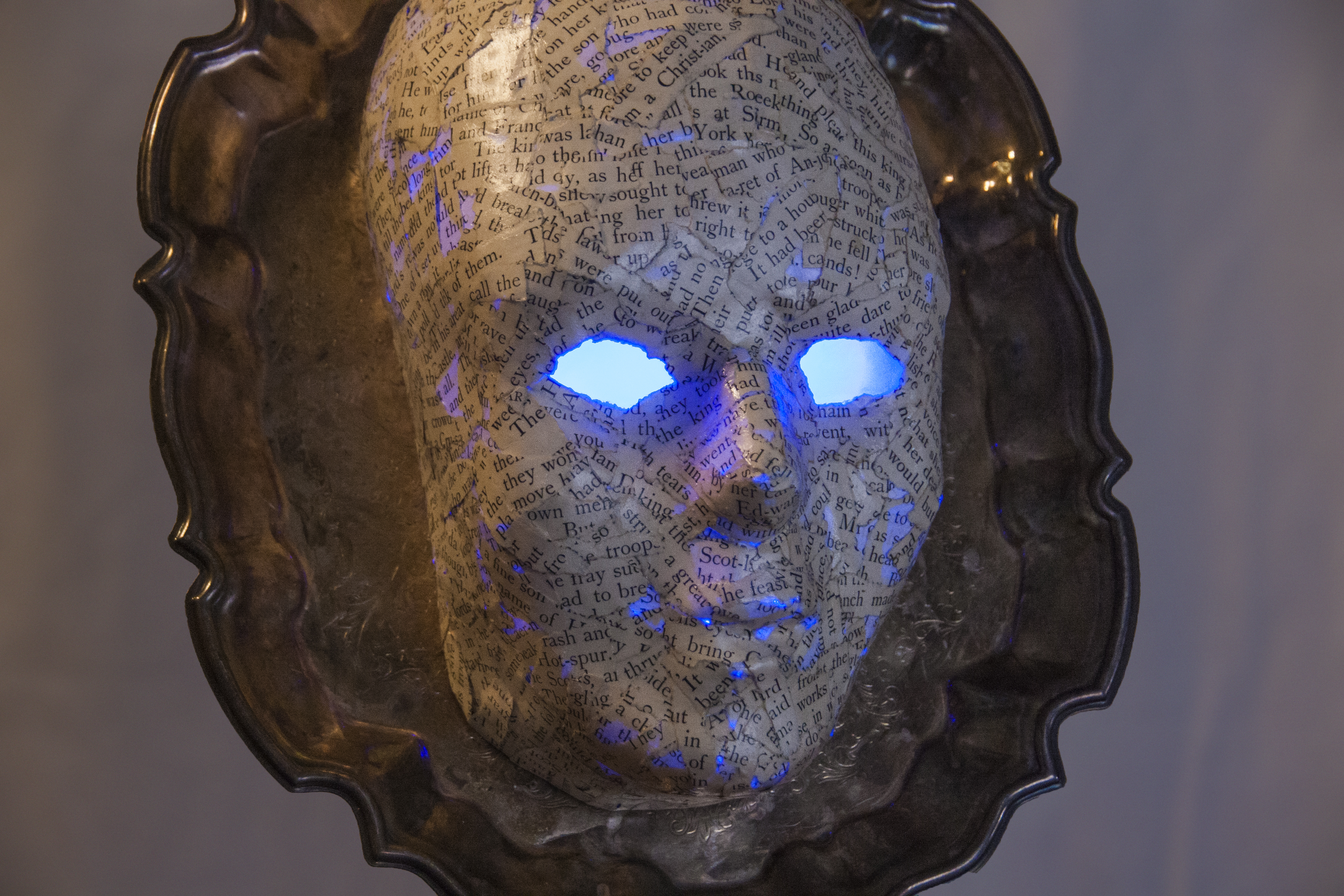 With its 2014 inclusion in the Merriam-Webster collegiate dictionary (Steinmetz), steampunk is finally being taken seriously as a legitimate artistic and cultural movement. This article will help define that movement, review current works within its boundaries, and explore the relationship between makers and steampunks worldwide. Steampunk is a valid contemporary art movement that pays homage to the craftsmanship of the past, while putting the cogs in motion towards a more elegant future.

What Qualifies as Steampunk?

There is a battle being fought in the minds and commentaries of the steampunk community over what properly qualifies as steampunk; it is a notoriously difficult thing to define. Some would say that only those science fiction works which strive for Victorian anachronism and the elegance of steam powered technology qualify as true steampunk, while others maintain that the definition should be much more inclusive. Nevins describes these two opposing viewpoints as the descriptivists, who are puritanical in their definitions, and the prescriptivists, who are much more liberally minded and open to broader interpretations of the genre and its derivatives (513). There is a third viewpoint that argues that steampunk is not a genre, but an aesthetic, and can thus be applied to just about anything (Smith 2).

These two camps argue (largely to their own proponents) about what the true essence of steampunk literature may actually be. The descriptivists are those that keep to the narrow definition as it was initially stated by K. W. Jeter in his letter to Locus Magazine, which first gave a name to the genre. The three key points that Jeter made were that the writing was in a “gonzo-historical manner” dealing with “Victorian fantas[y]” and “appropriate technology of that era” (57). The descriptivists are much more comfortable with extending steampunks boundaries to include “everything from the Western-flavored space opera Firefly (2005) to pseudo-Edwardian colonialist high adventure anime, from the industrial dance music of the band Abney Park to the current alternative fashion of mock-Victorian clothing” (Nevins 513). The descriptivist readily admits that it is very difficult to pin down a definitive meaning and therefor they are more accepting of works that contain an array of visual and thematic cues. These then make up a spectrum of steampunk which “is more, or is less” rather than a binary “is, or is not.” Since current authors and artists will continue to define the movement as it inevitably progresses, the descriptivists seem to be winning what argument there is. However, Nevis posits that it is likely to be better for both sides (and the movement as a whole), to focus on the “more profitable discussions of interpretation and meaning” (517).

When Forlini mentions the “invocation of the nineteenth century”, she is unwittingly bringing to light the central problem in attempting to define steampunk so rigidly as a literary genre: so many new works bend the definition that it is impossible for it to remain a useful definition at all (17). Yet, despite the blatant disregard of the implied rules by many authors, there are clearly defining elements which can be identified at a glance, by even a newcomer, as being steampunky -without being forced into the sub-genre of science fiction. A work can remain steampunk and also be historical fiction, adventure, horror, even erotica. It is no longer limited in scope to mere words, either; fashion, art, film, music, video games and even entire communities can embody the spirit of steampunk without getting bogged down in the spiral of debate as to which label they should be filed under. It is, in fact, this small but inherent act of rebellion at being locked down which proves itself to be one of steampunk’s most immutable and endearing properties. Smith concludes that a “thing” can be whatever it wants to be, and be simultaneously steampunk, when it is projected through the brass goggled filters of “retrofuturism, neo-Victorianism, technofantasy and the theme of revolution” (180). Steampunk has moved beyond a literary genre and is now instead an artistic, cultural, and even philosophical movement.

Even with the current level of debate, there are plenty of universally accepted steampunk works. It would not be prudent to attempt to list every title in existence, so this section will only give the reader a brief overview of some of the more popular creators/titles in literature, film and television.

Steampunk started with literature. Before steampunk had a name, Jules Verne, H.G. Wells, Mary Shelley, and Bram Stoker were writing speculative fiction in the style of their era, which authors have ever since attempted to emulate. Such seminal works as 20,000 Leagues under the Sea, The Time Machine, Frankenstein, and Dracula served as the inspiration for many generations of steampunk authors. Current authors include the original ‘80s godfathers, Tim Powers, James P. Blalock and K.W. Jeter and their genre defining works The Anubis Gates, Homunculus, and Infernal Devices, respectively. These books established many of the now familiar tropes, such as neo-Victorian settings, anachronistic technology, airships, and the like. Bruce Sterling and the famous cyberpunk author William Gibson later joined forces to write The Difference Engine, in 1991 which further refined the genre with its speculative spin on the invention of a mechanical computer in Victorian Britain. More contemporary authors include the young adult author Cherie Peters and her Clockwork Century Universe novels, beginning with 2009’s Hugo Award winning Boneshaker, and Alan Moore & Kevin O’Neill’s The League of Extraordinary Gentlemen, which helped define steampunk’s “look” in the pages of its vividly illustrated comic books. Included within the series are such memorable literary characters as Professor Moriarty, Mina Harker, Captain Nemo, Dr. Jeckyll and The Invisible Man. There are additionally many volumes of collected works such as the Nick Gevers edited anthology Extraordinary Engines, featuring short stories on such varied topics as domestic robot maids and forensic pathology (Klima). Many more works are published every month, as the influence of the genre continues to grow.

As befits most literary genres, several of the more popular steampunk titles have been adapted to the screen with varying degrees of critical and financial success. As is the case with the literature, early works were retroactively included. Titles such as Disney Studio’s 1954 adaption of Jules Verne’s 20,000 Leagues under the Sea, CBS’ television series The Wild, Wild West which ran from 1965 to 1969 and followed the exploits of “two gadget-laden Secret Service agents” (Miller and Bowdoin 87), and other adaptions of works from Wells, Stoker, and Shelley were pulled under the blanket of steampunk, once the genre had been given a name. With steampunk beginning to secure a larger market appeal, new adaptions emerged. These included a 1999 film version of Wild Wild West starring Will Smith and Kenneth Branagh, the critically panned but financially successful 2003 adaptation of The League of Extraordinary Gentlemen, starring Sean Connery in one of his last roles before retirement, and 2004’s Hugh Jackman helmed Van Helsing which features reimaginings of characters from both Stoker’s Dracula and Shelley’s Frankenstein (Miller and Bowdoin 87). These, and many more, have opened the eyes of Hollywood to the future of the neo-Victorian film movement and the flood of moviegoers willing to pay to see anything steampunk.

Steampunk is a valid contemporary art movement that pays homage to the craftsmanship of the past, while putting the cogs in motion towards a more elegant future. With a large body of creative works to choose from and more coming every day, the world of steampunk is ever expanding. Although an all-inclusive definition of the meaning of steampunk may never be forthcoming, the ideals and aesthetics in all their iterations have proven to be a fertile ground for the discussion, and scholars and critics are taking the genre more seriously.

An analysis of the art and artists on display at Anachrotechnofetishism held from September 12 to October 3, 2008 in Seattle Washington. Forlina explores the relationships between people and things, and a post-human world through the lens of Neal Stephenson’s novel The Diamond Age. It includes descriptions of the works and photos, as well as the artists’ statements about them. It includes an extensive notes and bibliography section.

A copy of Jeter’s original letter to the editor which is generally accepted as the first use of the term “steampunk”.

A selection of literary works the author deems of importance to readers who are new to the steampunk genre. Includes brief descriptions of the works and publishing information for the texts cited. Brief and by no means exhaustive, it paints a very limited scope of what the world of steampunk has to offer.

Discusses selected steampunk books, films, and television shows in order to show how they relate to and, at times, subvert the traditional notions of the “western” genre. Shows how themes of magic, science and technology , and progress within steampunk works offer an alternative viewpoint to the traditional one found in most conventional westerns.

Describes the difference between two opposing viewpoints about qualifies a work as being steampunk. These include the traditionalist prescriptivists who assert only the original definition coined by Jeter counts when determining whether a work can be accepted as a legitimate part of the genre, and the more liberal descriptivists who maintain that the genre is continuously evolving and allow a more open acceptance of what should be acknowledged as properly steampunk.

A very detailed and well thought out dissertation on the idea that steampunk is not a genre, exclusively. Instead, it can be viewed as a group of aesthetic principles which collectively give a steampunk “impression” when seen together in a work. He asserts that this understanding allows for the open discussion and appreciation of the work itself without allowing oneself to be bogged down by an obsessive need to categorize. Many of the other works in this bibliography are sited in this source, as well.

A brief article highlighting some of the terms, and their definitions, which are new to the 2014 version of Merriam-Webster’s Collegiate Dictionary.