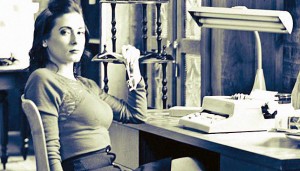 In today’s world, it seems as though women are still having to fight pretty hard to gain any footing in a man’s world – one that is heavily influenced by inexplicable body shame, rampant misogyny, and a misappropriation of womanly beauty. Being comfortable with our bodies and being open to the idea of modeling is something that is often considered synonymous with having a lack of morals or even a misunderstanding of what it means to be a confident, modern, and feminine lady. The times are a-changing, however; and women are swiftly demanding the right to be treated as equals to men, even while celebrating their innate and sexy feminism.

Having the poise to get in front of a camera takes a lot of balls; but that doesn’t mean that it is something that only men can do. Contrary to popular belief, being sexy does not mean that a woman is simply pandering to the sexual desires of men or creating some unattainable standard. Sexiness is an innate quality that can be found in a woman’s smile, posture, instinct, and intuition. Since confidence is one of the most attractive attributes of a person, sharing that with the world via modeling can be quite endowing to a society filled with shy, backwards, and self-doubting girls.

The Condemnation of Ugly Betty

Condemning sexy women for celebrating their beautiful bodies simply because contemporary society is still afraid of the inevitable reaction is not only ignorant but it is also irresponsible. That’s pretty much the same thing as expecting the world to remain filled with ugliness just to accommodate your inextinguishable doubts about yourself. At the end of the day, a man will do and think what he wants. Blaming models for gender inequality is completely incorrect; and thinking that way is exactly why nothing ever gets accomplished.

Women themselves are the biggest adversaries on the path towards real gender equality. Being secure in your own skin and in your relationships is what is important, not condemning everything that reminds you of your supposed shortcomings. You simply cannot stamp out all the sexiness in the world no matter how hard you try. Instead, you could simply choose a mate who makes you feel special and sexy regardless of your lack of physical similarities to the models in the magazines. Let us all have the right to celebrate the beauty we possess.

To Each Her Own

Becoming subject to the preconceived notions of what is appropriate or the outdated dogma that dictates unwarranted body shame is a big mistake. It is time to rewrite the book; and it starts with models who aren’t afraid to be photographed sexily. It ends with those same models not apologizing for being a woman, especially when they are ultimately confronted by those who don’t understand.

In recent news, Beyoncé chimed in on the controversial subject. “We need to stop buying the myth about gender equality. It isn’t a reality yet,” she reportedly said. This is coming from a woman who makes a living from being one of the sexiest female entrepreneurs in the world. Along with her writing, Beyoncé included her own sexy pool-side pictures in an effort to break down the barriers imposed by gender expectations.

Everybody knows the saying, “It’s a man’s world.” But, fewer people have heard the words “Pussy makes the world go round” uttered in casual conversation. The reason why quite clear; but the general idea of that frank sentiment is true in a lot of ways. Behind every successful man is a powerful woman, using her mind, soul, and body to provide for, nourish, and assuage away the woes of her fallen fella.

It is no wonder the power of the pussy has been kept under wraps for so long. It’s high time that we ladies start charging for such exceptional work; and the price is the freedom to express our sexy selves in front of as many cameras as we so choose. After all, this may be a man’s world; but in the famous words of James Brown, “It wouldn’t be nothin’ without a woman or a girl.”