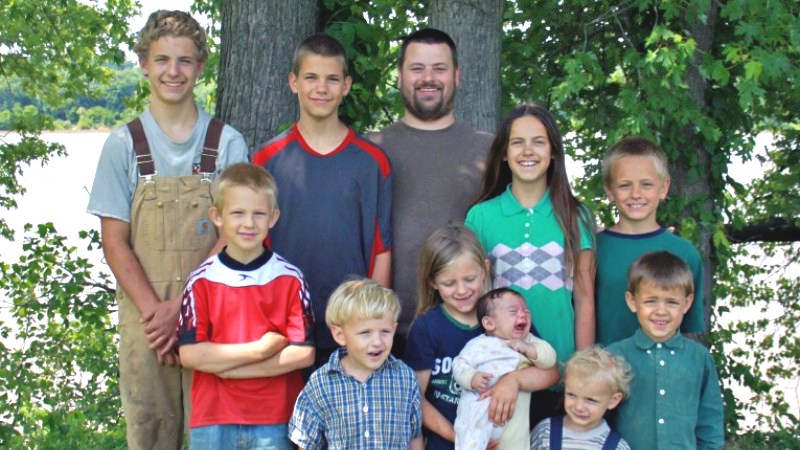 Joe and Nicole Naugler live on a homestead in rural Kentucky. They live a very simple life. They garden and raise animals. They are industrious people trying to teach their children how to live right.

They have ten children who are homeschooled on the homestead. They contribute to the success of the family crops and livestock, all while learning about the amazing beauty of life.

On May 6th, 2015, Breckinridge Co. Sheriff’s officers came to their home, acting on an anonymous tip, and entered their property and home without a warrant and without probable cause. Nicole was at home with the two oldest children, while Joe was away with the others. When the officers left the home, they attempted to block the access road to the family property. Nicole and the two boys got in their car to leave the family property. The got only a short way down the road before the officers pulled Nicole over.

During this stop, sheriffs deputies took their two oldest boys from Nicole’s custody, providing her no justification or documentation to support their action. Nicole was able to contact Joe briefly by telephone, but only for a short period of time, because she needed to use her phone to record the events.

Joe was able to arrange transportation to meet his wife where the stop had taken place. At that point, Nicole had been taken into custody for disorderly conduct (for not passively allowing the Sheriff to take her boys) and resisting arrest. Joe attempted to get out of the car to speak with the officers and his wife, and to recover the vehicle Nicole had been driving. The Sheriff, with his hand on his sidearm, ordered Joe back into the car. Joe complied with that request. The sheriff informed Joe that he had every intention of making this as difficult as possible for them and that their car would be impounded, despite the fact that Joe was there on­site to recover it.

A friend, who had driven Joe to the location, got out of the car to speak with the Sheriff. She was able to convince the Sheriff to let Joe recover the vehicle. Joe also recovered Nicole’s cell phone, which had been recording audio the entire time.

The Sheriff ordered Joe to turn the remaining eight children over to Breckinridge County Sheriff’s deputies by 10:00 a.m., and threatened him with felony charges if he does not comply.

At this time (roughly 5:00 CDT), Nicole is being held in custody in Hardinsburg, KY by the Breckinridge Co. Sheriff. The whereabouts of their two oldest sons is unknown to the family. Nicole faces a magistrate at 8:00 a.m. to set bail and an arraignment will take place shortly thereafter.

We ask for your support for the Naugler family at this time. Any support is greatly accepted. Whether you can or cannot contribute, please consider them in your prayers, meditations, positive energies, and any other support you can provide to help Joe and Nicole keep the homestead alive while fighting to get their kids back. Share their story!