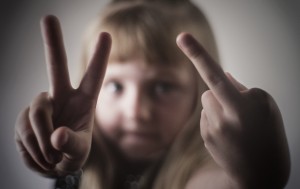 Did things really change from young childhood or is our perception skewered because of our memories?  I don’t remember my first day of kindergarten but even as an old man I still get nervous going into something unfamiliar.  Call it shyness or social anxiety, but even today I just always pawn it off as that “I hate people”.  I probably didn’t hate kids at age 4, but I’m sure I had a horrendous time those first couple days.  Even in the 12th grade I had a hard time fitting in to tell the truth.

When my little 4 yr old daughter arrived for her first day of kindergarten, she was nervous and broke down crying.  She kept asking “Why, why can’t I stay home with you Mama?”  We told her if she didn’t go to school, the Policemen will come take Mama and Dada to jail.  I could see her actually weighing this on her conscious, like jail time for us would be worth it to her.  She told us “OK, I’ll do kindergarten, but that’s it, no more school after that”.

Kindergarten — which translates to children’s garden — was designed to train and endocrine poor kids into a conformed and obedient workforce labor.  Kids went to work around 7 or 8 years old and kindergarten was used so they could become a constructive asset as soon as they headed into the factories or farms.  This was back in the late 1700’s and I know times have changed, but I am still conflicted with sending my young one to become an obedient clone.

Although I plan on supplementing her education at home just as much as she is learning at school.  I have always thought the education system was only part of the learning curriculum, that there needed to be home lessons that are just as important.  I don’t mean just manors and morals either.  Like the old Japanese families that taught generations of families the same martial arts over the centuries as a discipline and spiritual development, or the Jedi Knights who learned the ways of the force through a mentor to help them throughout life.  I want her to learn how to think for herself and know exactly what freedom is, what mental slavery consists of, and that it’s perfectly alright to question.  Question authority, question rules and why they are implemented the way they are and what they are trying to accomplish. And to always question religion, that to believe in something is giving up the search for the truth.

I remember finger painting and ABC’s, 1,2,3’s  and nap times, but I also remember the rules.  The ones that helped develop social skills,  like raise your hand to talk, single file lines, don’t hit girls, etc.  I know that controlling chaos and organizing riots is a necessity, but there are also the rules that turned us into sheep, turned us into no-questions-asked, tax-paying, pursuit-of-our-American-Dream, test takers.  By the time we are out of Primary school (12th grade), the rules and regulations suddenly have turned into ideologies, like government is never wrong, taxes are a must  to keep you safe-and-sound, there were no people in this land when Europeans arrived, and so on.

So as I’m heading home to see how my little girls first day went, I do believe I’m just as scared as her.  I fear she will forgo her dreams in lieu of a good paying job (doing what everyone else wants her to do), as I was taught.  That her motives in life will be corporate success, instead of true self-expression.  If only my mentors had told me to follow my dreams, that you can only fail at them if you try, but if you never try you will never succeed at them either.  Instead I was told from early on, “You have to have something else to fall back, you can’t rely on playing baseball all your life.”  So, while still in high school I got a low paying job, gave up my dream of replacing Steve Garvey at first base for the Los Angeles Dodgers, and joined the military after graduation.  If I had been told “Go for your dreams at any cost right now, you can always join the military as your back up plan”, then if all else failed, I’d be in the same rickety canoe as I’m in now.

My little girl is shy and gets nervous around strange people (let’s face it, most people are strange), just as I always have.  People often think shyness is a choice, an option taken by people consciously. They think that a shy person chooses to remain quiet, chooses to stand on the outskirts of the crowd looking in, chooses to be a loner.  Some have called me stuck up and arrogant because I don’t talk to people regularly.  A co-worker once told me he thought I was a racist since I never talked to “The Mexicans”, but he didn’t realize that he was the first person I talked to, brown skinned or white.  People who aren’t shy don’t realize how hard it is to get past the mental block and “just talk to them”.  Funny thing is, that years later I realize “they” really weren’t people I wanted to associate with anyhow.

The thing my little girl will learn of value the most will be socialization.  Even though school made me nervous all my life, that was the one place I could go and be around my “peers” so to speak.  That was were I learned most people are assholes, most people are odd and weird, most people aren’t worth dealing with.  Full time home schooling might delay her from this life saving lesson.  As my little child grows up out of societies garden, I will make sure she is never a weed, or a genetically modified carnation that resembles every other child that comes from the farm.  I will nurture her into the wild flower she already is and let her know it’s perfectly fine to have your middle finger in the air, while the whole time smiling.