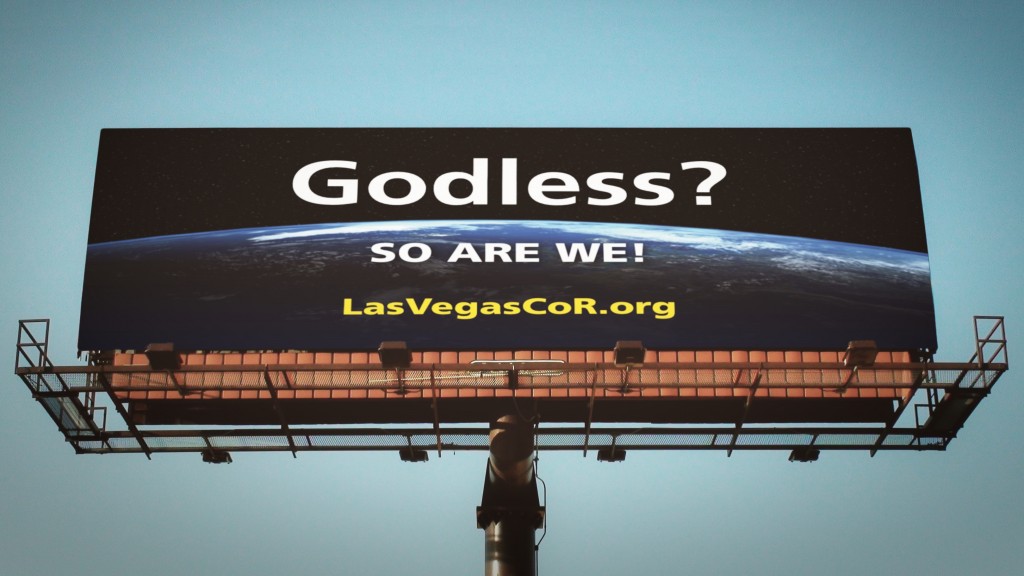 “Godless? So are we!” These words, superimposed over an image of the earth from space, have appeared on a prominent billboard in Las Vegas. This billboard, promoting the Las Vegas Coalition of Reason, appeared Monday, December 22, on I-15, just south of Flamingo Road, facing north. It will be viewable by traffic heading to the McCarran International Airport.

“We want to make our presence in the community known,” said Ray Johnson, coordinator of Las Vegas CoR. “Non-theistic people are your family members, friends, neighbors and co-workers. We may not believe in a deity or the supernatural, but we are compassionate, ethical members of this community.”

The billboard has been made possible through $6,500 in funding from the United Coalition of Reason (UnitedCoR), a national organization headquartered in Washington DC. The 14 by 48 foot tall billboard will be up for four weeks, a period to include Festivus, Human Light, Christmas, Kwanzaa, New Year’s Day and the first half of January. It is illuminated at night.

This Las Vegas campaign is part a coordinated nationwide program that began in 2009. From then to now, 61 similar campaigns have been launched in 38 states and the District of Columbia by UnitedCoR.

“The point of our national awareness campaign is to reach out to the millions of humanists, atheists and agnostics living in the United States,” explained Dr. Jason Heap, UnitedCoR national coordinator. “Non-theists sometimes don’t realize there’s a community for them, especially during the winter holiday season when they are overwhelmed with traditional theistic messages. So we hope our effort will serve as a beacon and let them know they aren’t alone.”

Johnson added, “We would like to encourage local atheists, agnostics, freethinkers, skeptics, secularists and humanists to stand up and be counted. If you are a Las Vegas nonbeliever, know that you are not alone.”

“Being visible is important to us,” Heap concluded, “because, in our society, non-theistic people often don’t know many like themselves. The winter holiday season belongs to everyone, not just a few.”

The Las Vegas Coalition of Reason (www.LasVegasCoR.org) serves as a resource for the public and is made up of the Humanist Association of Las Vegas, Las Vegas Atheists, Secular Student Alliance of UNLV, Secular Legal Society of UNLV and the Unitarian Universalist Congregation of Las Vegas – Humanists. Friends of Las Vegas CoR include the United Church of Bacon, the Coming Out Godless Project, the Proud Atheist and Sunday Assembly—Las Vegas.

The United Coalition of Reason (www.UnitedCoR.org) exists to raise the visibility and sense of unity among local groups in the community of reason by providing funding and expertise to help them cooperate toward the goal of raising their public visibility.