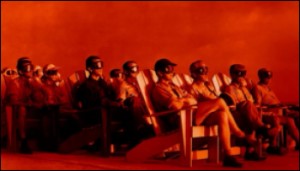 Corporations, and a brief “History” of the Coup d’etat

Power grabs have existed throughout history. Whether we are considering the political power structures of the past, or personal relationships, the quest for more has prevailed throughout our human psyche to this very day. One might argue aggressive opportunism has the capacity to erect hierarchies, entrench ideas and ideologies, and stir human conflict, even to the point of men wiping each other out by the hundreds of thousands. This is the cost of having a fixed society as opposed to an emergent one, but that is a separate argument yet. As time has moved on, and the corporation gained more and more personhood standing in the eyes of government, their tactics grew more and more deadly. In this article I will demonstrate three cases, past and present, of corporate tactics and the affects they cause.

In 1933, top executives of major corporations like Chase Bank, General Motors, Goodyear, Standard Oil, individuals inside of the DuPont family, Prescott Bush (grandfather of George W. Bush), and others attempted to collaborate with General Smedley Butler, in the hopes of forming a fascist veterans organization of over 500,000 men. Their intent was to overthrow (through physical means or otherwise) then-President Franklin Roosevelt from office, and takeover the means of governance with a far-right wing agenda in mind. Butler revealed his testimony of the plots existence in the McCormack-Dickstein committee on Un-American Activities, the first committee of its kind, in 1934. The matter was largely forgotten by the public, though the same conspirators went on to fund the Nazi regime all the way up until the United States entered World War II. Since the war, the government’s relationships with corporate interests have become solidified as the dominant power structure in the globalized economy. Roles of government have been bought and paid for, especially positions in the executive branch. We know this.

Take for instance, Steven Koonin, who operated as the Chief Scientist at BP from 2004 to early 2009, then went to work for the Obama administration as the U.S. Department of Energy’s secretary for science. This, is far from the only link between Big Oil and Big Government. Or look at Rahm Emmanuel, current mayor of Chicago. He was a former contract employee with Goldman Sachs (the largest investment bank on Wall Street), also, former Chief of Staff under Barack Obama. Also, not the only link between this/other banks, and the current administration. We can’t mention corporatism without mentioning the revolving door between Monsanto and the United States government, though that list is certainly long. I’ll mention Linda Fisher, as an example, former Assistant Administrator of the United States Environmental Protection Agency’s Office of Pollution Prevention, Pesticides, and Toxic Substances, now Vice President of Government and Public Affairs for Monsanto Corporation.

Corporations and their plots also affect my current state of residence. 3M has been operating in St. Paul, Minnesota since it was referred to as Minnesota Mining and Manufacturing Co, producing industrial materials, paper products, tapes and adhesives. The wake of destruction caused by this corporate person has been immense. From clear-cutting of forests to dumping of toxic materials in public water and land areas, they get away with their behavior by financially contributing to front groups like ALEC (American Legislative Exchange Council), whom in turn launder the money some more before passing it off to state legislators that will vote in accordance with their wishes. Not alone in this effort to pollute and destroy Minnesota’s precious eco-system are corporations PolyMet Mining Company (a Canadian corporation) and Twin Metals, whom are planning to exploit the lands natural resources for iron/copper/nickel sulfides. PolyMet has plans to build a copper-nickel mine between Babbitt and Hoyt Lakes. It would be located near the Embarrass and Partridge Rivers, which flow into the St. Louis River and then Lake Superior, which hold roughly 10% of what is left of the world’s fresh water. And Twin Metals, is the joint venture of Duluth Metals Limited, a Canadian company, and Antofagasta PLC, a Chilean-based mining company. They want to build an underground mine near Birch Lake, only two or three miles from the Boundary Waters canoeing area. It doesn’t stop there.

Enbridge Inc (a Canadian-based company) responsible for the largest oil spill on land ever, in Kalamazoo Michigan, is seeking to increase the amount of tar sands oil being pumped from Alberta in its Alberta Clipper pipeline, from 450,000 barrels a day, to a maximum of 880,000 barrels a day. Tar sands oil and its method of transportation (notably mixing with diluted bitumen to ease travel through the line) is widely considered the most environmentally destructive oil ever produced. Many leading environmentalists say to harvest this resource would be “game over” as far as climate destabilization is concerned. Is this really worth the temporary sense of safety offered by Enbridge for menial, dangerous jobs? As always under the “democratic republic” model we currently follow, the corporation targets the political representative of the area, and the coup follows, whether realized by the public or not.

Currently, Rick Nolan is the “Representative” of the 8th congressional district, with his office located in Duluth, Minnesota. To say that Nolan is soft on issues such as this (though he claims otherwise), would be an understatement. In September, he voted in favor of the “National Strategic and Critical Minerals Production Act of 2013”, which would streamline production and weaken environmental regulations for many types of mining. I don’t trust this man (whose office is literally right across the street from Enbridge’s) to make the right decision, and I’ve met quite a few other people in Northern Minnesota who would echo similar sentiments. They don’t want to see their lives disrupted. They don’t want their health jeopardized, and they damn sure don’t want these operations running through their land. As is the case with the Alberta Clipper, which runs through Red Lake tribal lands without a settlement or an easement from the peoples who live there. This is a problem that isn’t sitting well with them, and while they are the first to fight back, they could use all the backup they can get.

These are just a few of the many corporations who are exploiting the “state” where I live. I am sure you could name a few notable ones where you are from too. We’ve sat by and watched as corporations went from entities whose purpose was to aid human progress, and now industrial civilization has singlehandedly become the biggest threat to human life. But still, we aren’t finished yet. On to the last example.

The Trans Pacific Partnership could be considered the corporations final attempt at a coup d’état of what is left of our current means of governance. It is being disguised as an international treaty, crafted by multi-national corporations and being negotiated in secret by the Office of the U.S. Trade Representative. It is being called “NAFTA on steroids”. Over 600 corporate advisors have access to the text, but not the public or many members of the U.S. House and Senate. Of the 29 provisions included, only 5 of them have anything to do with trade. It would lower food safety standards, prohibit GMO labeling and weaken current environmental regulations, including those which restrict hydraulic fracturing (fracking). It would off-shore even more manufacturing jobs and lower wages to that of Vietnams’. It would raise prescription drug premiums and roll back banking reforms. It would end internet freedom and require internet service providers to monitor user activity, and report back any and all “violations”. Also included is the granting of “corporate nationhood” and the establishment of international trade tribunals, who would have the ability to sue entire nations for interference in their ability to make profit. And we mustn’t forget ‘fast track’, which is a policy-making process that allows trade pacts to circumvent ordinary Congressional review, amendment and debate procedures. This is the finishing touch the powers that were have been looking for.

Now that we know how the corporation uses its perceived monetary power, and what their plan is, we need to organize. There simply isn’t another option. Either we let them win, in turn destroying whole peoples and planets, or we fight back. I’ll highlight this particular quandary next week. Thank you for reading.