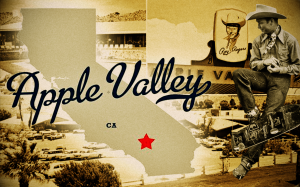 When I first moved to Apple Valley, CA, there was always the local legend of Roy Rogers and Dale Evans — the famous movie stars from old black and white western films.  There was his ranch with the house built in the shape of a horseshoe, or his favorite eating establishments like Lotta Burger or  Jilly’s Cafe.  His horse Trigger (who had been stuffed) was out in front of the Roy Rogers Museum and could be seen from the CA15 freeway.  The legends were thick, they seemed bigger than the man himself.

I remember sitting with my grandma watching the old westerns growing up.  The ones with Roy and Dale, Ronald Reagan (“Our President Grandma?”), and Gene Autry mostly.  Around my town, people pointed out rock formations and say “so and so made this or that movie there” or “remember this one scene, that’s the hill they fought the Indians on”.  It was such a major aspect of town life that I wondered why it wasn’t named Royville or something like that.  Years later parts of the main Highway 18 were named Roy Rogers Hwy and a street named Dale Evans Parkway.

So it was always a big deal for the 11 year old who moved to Apple Valley that some of the Cowboys who fought the bad guys were right here.  With barely over 10,000 in my hometown, I hardly believed that someone famous lived there, that someone famous was amongst us commoners.  It wasn’t that they lived just in town but people claimed they were always seen about all over town.  I later came to find out that Roy and Dale were extremely active in all aspects of town citizenship.  They donated money, time and patronized locally as much as they could.  My family saw him through the window eating at Lotta Burger a few occasions, and we often drove past his ranch slowly when we were in that part of town.

But the first face-to-face with the famous couple came down at high noon, right out in front of Jilly’s Cafe.  Actually is wasn’t me, I barely missed that showdown.  My little brother (7 years old at the time) and I were skateboarding along the sidewalk past the cafe.  I rolled by the front door as it was opening and when I heard a voice say “whoa” and my little brother stopping, I turned around.

My brother had picked up his skateboard and Roy and Dale were standing there, they were smiling so I don’t think they were upset or almost ran over.  In fact they were both friendly and started talking to him.  First there was always the older folks concern about us wearing helmets and being careful, but then Roy asked my brother to do one of those “jumping things” we do.  I was shy and didn’t  join in the encounter.  But my brother, who to my surprise knew exactly who both of them were (he watched those movies too), did a few tricks and traded pleasantries with them before we all went on our way.

He was in awe when he skated up to me and asked, “Do you know who that was?”  Although I never actually crossed direct paths with them, I did get to see why they were so loved throughout the community.  They’re buried in Apple Vally, right around the corner from where I now live.  Now that I’m older I realize that it wasn’t a big deal, but I still think about that day skateboarding when I visit there plots every once in while when I’m at the cemetery.  Worlds apart, riding skateboards and gunslinging cowboys, but our little town was big enough for the lot of us.