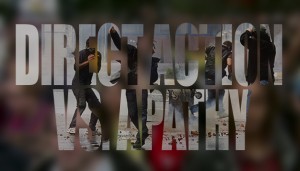 The tone of this article will be somewhat forward. It is to serve as a call to arms; intended for anyone and everyone to seriously consider what I am trying to explain, and plan thenceforth. I wish to discuss the juxtaposition of two concepts which seem to have taken hold of the dominant cultural narrative, notably in what is referred to typically as the western hemisphere. These two concepts are known as ‘direct action’ and ‘apathy’. Seemingly upon first glance these two are polar opposites, but the line that divides them may be a lot smaller than one might think. But before we get into semantic tangents, perhaps I should provide a little context to these words, evaluate how I see their role in the current social order, and bring forth ideas which others may not have considered.

“The modern paradigm may still seem insurmountable because it possesses an outward front, the work of a long past; but is in reality an edifice crumbling to ruin and destined to fall in at the first storm.” – Gustave Le Bon

I will start with direct action. Far from only being a tactic employed by activists, direct action is relatively simple to explain, because we all directly act on behalf of our own self-interest, or in the interest of others quite frequently. Any action that negates need of representation from others to accomplish goals directly, is direct action. Whether we are talking about giving a person the Heimlich maneuver if they are choking, as opposed to waiting to take them to the doctor, or breaking laws that have been written in order to slow down or stop mechanistic forms of oppression and destruction, it is the motivation and the deed that follows, that I refer to in this sense. Direct action is cutting out the middle man, and doing what YOU feel needs to be done, in that moment, at that moment.

We live in an age of great change and transition. With all the advancements made in technology, transportation, and energy systems, we have in fact rendered many of our existing institutions obsolete. The ability to produce material abundance is within reach, making political, legal, and economic systems into more repressive and inhibitive forces, rather than augmenting ones. It is only in the narrow self-interest of those whom work within these systems who benefit from their operations in one way or another. Thus, in order to oust the old, and bring forth the new means of procedure, non-violent direct action must be taken by many individuals in conjunction with other coordinated, targeted campaigns. I say non-violence for many reasons, but only a few of which I will briefly explain here, as many lives have bore the brunt of the common argument (violent vs. non-violent tactics), and those people can speak from dire experience in that area much more descriptive than I. Non-violence should not be equated with pacifism, although passive resistance is a necessary component as well. Boycotts, strikes, and national non-cooperational campaigns deal a strategic blow to an economic/social hierarchy, but it is going to take much more. As we have learned from the past, these actions by themselves aren’t enough to bring about the physical change we desire, but also, require, in order to elevate public and ecological health from present levels.

An example of non-violent direct action could be characterized by looking at the Greenham Common Women’s Peace Camp, in Berkshire, England. The camp was brought about in September 1981 after a Welsh group, Women for Life on Earth, arrived at Greenham to protest the decision of the British government to allow nuclear cruise missiles to be stored there. The first blockade of the base occurred in May 1982 with 250 women protesting, in the form of linking arms and wrapping around the exterior fence, during which 34 arrests were made. The camp became well known when on April 1st 1983, approximately 70,000 women formed a 14 mile long human chain, from Greenham to Aldermaston and the ordnance factory located in Burghfield. Fences were cut, and hundreds of arrests were made. Evictions cleared the camp multiple times over nearly ten years, until the last missile left the facility in 1991, with the women set on returning to the 9 separate camps they had built on the property. The last 4 peaceful warriors left Greenham in 2000, shortly after a memorial was erected dedicated to the meaningful campaign. This, is a story we can learn from. This is a model that has been laid out for us to follow, among many others.

Here is a list of just some actions that will support and bring about the coming revolution of values. Mass gatherings, demonstrations, Marches, parades, Flash mobs, swarms, shutdown harmful corporate and governmental operations, worker strikes, hunger strikes, sit-ins, strategic defaults, debt strikes, foreclosure prevention, boycotting corrupt corporations, moving your money out of the big banks and the stock market, use alternative currencies and economic systems, cancel your cable television and support independent media, use independent online tools that don’t sell your info and protect your privacy, online civil disobedience, anonymous operations, leak information on corruption, use alternative energy, build your own urban and hydroponic farms, or get your food from them, support local businesses, join local community organizations, take part in food banks and help develop community support systems, start or join intentional and autonomous communities, experiment with new governing systems such as ‘Liquid Democracy’, host teach-ins, organize socially conscious events, make conscious media, guerrilla postering, messages on money, help inspiring groups and organizations spread their message, random acts of kindness and compassion, and last but certainly not least, mass meditations, prayer sessions and spiritual actions. You can see, there is no shortage of things to be done, and anyone can have any role they want. We are the heroes we have been waiting for.

“Let’s crowdsource a relentless global wave of action that protests the corrupt, while also rallying around and celebrating effective alternatives and solutions to the vast problems we are confronted by. Imagine thousands of nonviolent guerrilla armies swarming corrupt targets and rallying for viable solutions for a sustained three-month cycle. If we begin preparing now, a massive spring offensive can lead to a summer of transformation. (…) Pick whatever issues concern you most and run with them, knowing that likeminded people throughout the world will also be fighting in solidarity, in whatever way they can, at the same time you are.” Anonymous (2013)

Apathy is something we have all experienced at one point or another. According to Wikipedia, apathy is most commonly defined as a lack of feeling, emotion, interest, or concern. It is a state of indifference, or the suppression of emotions such as concern, excitement, motivation and/or passion. An apathetic individual has an absence of interest in or concern about emotional, social, spiritual, philosophical and/or physical life and the world. Perhaps you have heard that the world will never change, because the majority of individuals on the planet are stupid, lazy or selfish. These outward perceptions are driven in many parts by our culture of media, perpetuating a cycle of intentional exclusion from the methods of community building or even local/state/national politics. It is a dangerous idea, that engaging in activities to better the community or planet are spectator sports, and should only be trusted to “the experts” or “the politicians”. This cycle, fed by the moneyed media and their intent to exclude the common person, explains the rampant cynicism we recognize not only within each other, but within ourselves. Therefore, in the words of activist David Meslin, “apathy ought not to be looked at as an internal disorder, but as a complex web of cultural barriers that reinforces disengagement.”

Apathy is something that can be overcame and redefined, the choice lies with you.