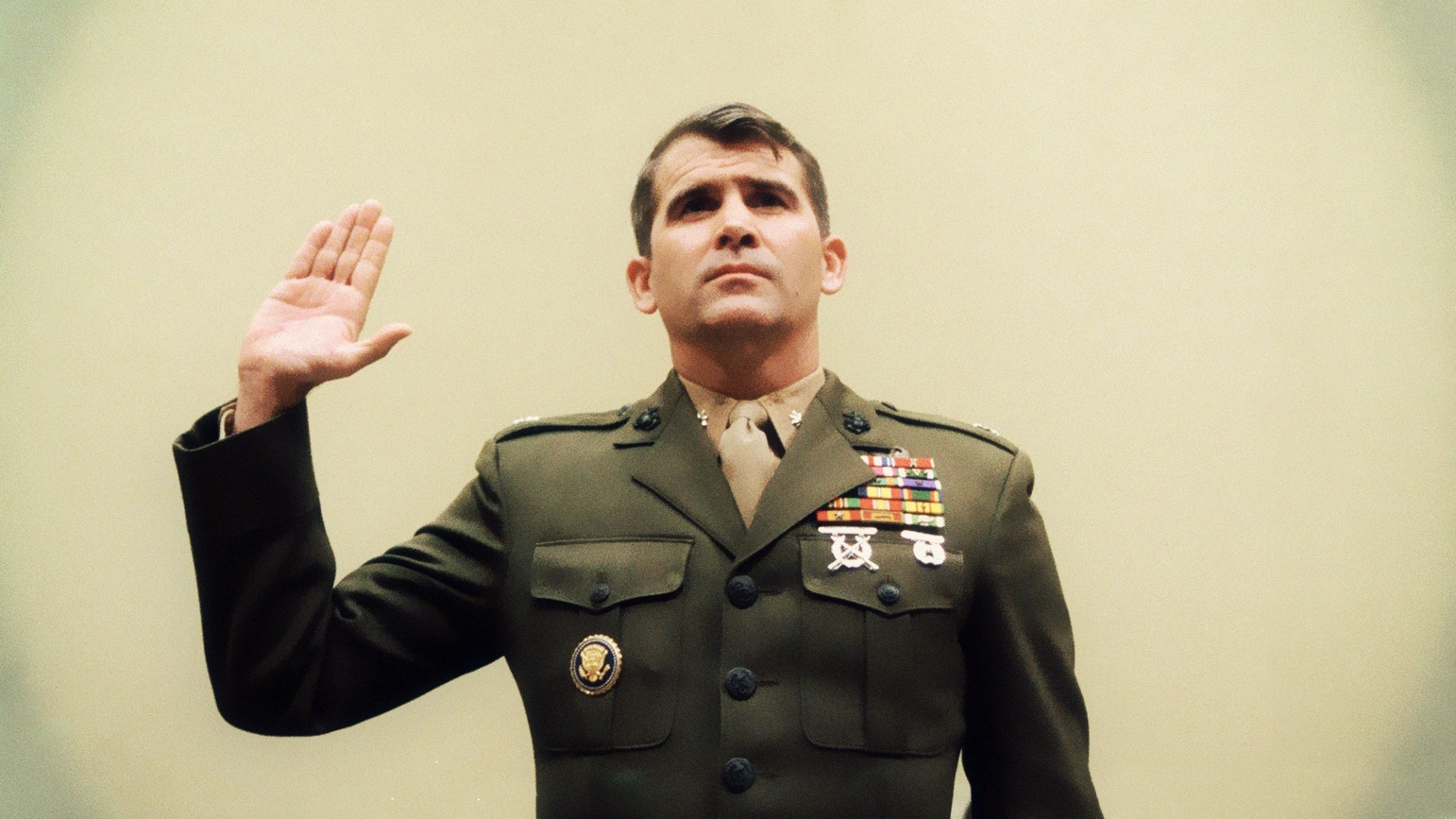 Event horizon: A continuity timeline of the “last” 30 years.

1984, Rex 84, [short for Readiness Exercise 1984, was a secretive “scenario and drill” developed by the United States federal government to suspend the United States Constitution, declare martial law, place military commanders in charge of state and local governments, and detain large numbers of American citizens who are deemed to be “national security threats”. This came out in 1987 during the Iran-Contra Hearings grilling of Oliver North, the American public got a glimpse of “highly sensitive” emergency planning North had been involved in.] – View Video Here – Iran-Contra Hearings, Oliver North Testimony (1987).

1997, Army Regulation 210-35 [The United States Army recently declassified this document that “provides guidance on establishing prison and labor camps on [US] Army installations. The regulation, first drafted in 1997, underwent a “rapid act revision” in January 2005; These would be used to keep inmates of the “labor programs” resident on the installations.] – View Document (Deleted). (Backup Mirror Link.)

2001, Executive Order 13224, [the President declared a national emergency with respect to persons who commit, threaten to commit, or support terrorism, pursuant to the International Emergency Economic Powers Act (50 U.S.C. 1701-1706).” This gave the president the power to confiscate without trial or warning the property of individuals providing funds to entities, such as charitable foundations, which were judged to be supporting terrorism. – View Document Here.

2001, USA PATRIOT Act [The Patriot Act Is an Act of the U.S. Congress that was signed into law by President George W. Bush on October 26, 2001. It is the authorization of indefinite detentions of immigrants] “No Senator read the bill according to Congressman Jim McDermott.” Congressman Ron Paul (R-Tex) told the Washington Times that “no member of Congress was allowed to read the first Patriot Act”. – View Document Here.

2002, USNORTHCOM established [United States Northern Command (USNORTHCOM) was created on April 25, 2002 when President George W. Bush approved a new Unified Command Plan. USNORTHCOM went operational on October 1, 2002. (USNORTHCOM) is a Unified Combatant Command of the U.S. military tasked with providing military support for civil authorities in the U.S., and protecting the territory and national interests of the United States within the contiguous United States, Alaska, Canada, Mexico (and the air, land and sea approaches to these areas).] – More Info Here.

2003, Domestic Security Enhancement Act of 2003 (Patriot Act II). [On February 7, 2003 the Center for Public Integrity, a non-partisan public interest think-tank in DC, revealed the full text of the Domestic Security Enhancement Act of 2003. The classified document had been leaked to them by an unnamed source inside the Federal government. This bill also paved the way for indefinite detentions of U.S. citizens in the Military Commissions Act of 2006 below. in all this document gave them the power to declare anyone a terrorist at any moment, including U.S. citizens] – View Document Here.

2005, Confiscation of firearms in response to Hurricane Katrina [Controversy arose over a September 8 city-wide order by New Orleans Police Superintendent Eddie Compass to local police, National Guard troops, and US Marshals to confiscate all civilian-held firearms. “No one will be able to be armed,” Compass said. “Guns will be taken. Only law enforcement will be allowed to have guns.” National Guard troops, armed with assault rifles, were used for house to house searches, seizing firearms and attempting to get those remaining in the city to leave. Seizures were carried out without warrant, and in some cases with excessive force; one instance captured on film involved 58 year old New Orleans resident.] – View Video Here.

2006, The United States Military Commissions Act of 2006, [Known as HR-6166, was an Act of Congress signed by President George W. Bush on October 17, 2006. This is the one that it empowers the Government to declare without cause not just aliens, but also U.S. citizens, “unlawful enemy combatants.”] – View Document Here.

2007, Homegrown Terrorism Prevention Act of 2007 (HR1955), [passed the House by the lopsided vote of 404-6, would set up a commission to “examine and report upon the facts and causes” of so-called violent radicalism and extremist ideology, then make legislative recommendations on combatting it.] – View Document Here.

2007, NSPD-51 [The White House quietly issued National Security Presidential Directive 51 (NSPD-51). In 2007, President Bush issued Presidential Directive NSPD-51, which purported to change Continuity of Government plans. NSPD51 is odd because:
NSPD51 was passed without Congressional input. Even the New York Times wrote in an editorial: “Beyond cases of actual insurrection, the President may now use military troops as a domestic police force in response to a natural disaster, a disease outbreak, terrorist attack, or to any other condition. Changes of this magnitude should be made only after a thorough public airing. But these new Presidential powers were slipped into the law without hearings or public debate.”] – View Document Here.

2009, H.R. 645 (111th): National Emergency Centers Establishment Act [A bill introduced in Congress authorizes the Department of Homeland Security to set up a network of FEMA camp facilities to be used to house U.S. citizens in the event of a national emergency.] – View Document Here.

2009, The MIAC report [The Missouri Information Analysis Center (MIAC) entitled “The Modern Militia Movement” and dated February 20, 2009. A footer on the document indicates it is “unclassified” but “law enforcement sensitive,” in other words not for public consumption. This document specifically describes supporters of presidential candidates Ron Paul as “militia” influenced terrorists and instructs the Missouri police to be on the lookout for supporters displaying bumper stickers and other paraphernalia associated with the Constitution.] – View Document Here.

2009, CYBERCOM established. [USCYBERCOM plans, coordinates, integrates, synchronizes and conducts activities to: direct the operations and defense of specified Department of Defense information networks and; prepare to, and when directed, conduct full-spectrum military cyberspace operations in order to enable actions in all domains, ensure US/Allied freedom of action in cyberspace and deny the same to our adversaries.”] – More Info Here.

2010, Continuing Appropriations and Surface Transportation Extensions Act, 2011 [The original bill was titled the “Military Construction and Veterans Affairs Appropriation Act, 2009”. For acquisition, construction, installation, and equipment of temporary or permanent public works, military installations, facilities, and real property for the Army as currently authorized by law, including personnel in the Army Corps of Engineers and other personal services necessary for the purposes of this appropriation, and for construction and operation of facilities in support of the functions of the Commander in Chief, $4,554,906,000, to remain available until September 30, 2014] – View Document Here.

April 2011, HR 1505, the “National Security and Federal Lands Protection Act.” [This monstrous bill empowers the Department of Homeland Security (DHS) to confiscate to itself tens of thousands of acres of land across the US northern border. This is for “national security” reasons, of course.] – View Document Here.

Within an hour of posting the critical FEMA document sourced publicly on a government website that discloses plans to hire contract employees “under a continuity of government plan”, the document was removed and replaced by the following cryptic warning against posting ‘classified’ documents:

“ATTENTION: Agency users are responsible for properly uploading controlled, unclassified materialsto FBO using the access control procedures for document packages and attachments detailed in the FBO Buyers Guide. Do not upload ANY classified materials to FBO.”

December 2011, NDAA (S.1867), The National Defense Authorization Act [putting into law for the first time the asserted “right” of government to indefinitely detain American citizens without trial. Exactly 220 years to the date after the Bill of Rights was ratified, the US Senate today voted 86 to 13 in favor of the National Defense Authorization Act for Fiscal Year 2012, allowing the indefinite detention and torture of Americans.] –View Document Here.

March 7th 2012, HR.347 [Also known as the “Federal Restricted Buildings and Grounds Improvement Act of 2011” the bill makes it a felony to disrupt or protest at any place or event attended by any person with secret service protection.] – View Document Here.

March 7th 2012, Treason in the House [This video features: – “General Martin E. Dempsey” current Chairman of the Joint Chiefs of Staff. and “Leon Panetta” the current The Secretary of Defense] – View Video Here.

March 12th 2012, 450 million rounds of 40 caliber hollow point ammo. [ATK was awarded a contract to provide up to 450 MILLION hollow point bullets to the Department of Homeland Security over the next five years.] – View Press Release (Deleted). – More info here

Here we are 30 years later. Today is the event horizon of your tomorrow, just remember it is yours to give up! My jury is in… This horrible truth I believe points one direction. Truth, is a one-way road in a car with no breaks. So in remembrance of what was known as the “Bill of Rights.” I want you all to read it! Know it, know what is lost!

Amendment 1
Congress shall make no law respecting an establishment of religion, or prohibiting the free exercise thereof; or abridging the freedom of speech, or of the press; or the right of the people peaceably to assemble, and to petition the Government for a redress of grievances.

Amendment 2
A well regulated Militia, being necessary to the security of a free State, the right of the people to keep and bear Arms, shall not be infringed.

Amendment 3
No Soldier shall, in time of peace be quartered in any house, without the consent of the Owner, nor in time of war, but in a manner to be prescribed by law.

Amendment 4
The right of the people to be secure in their persons, houses, papers, and effects, against unreasonable searches and seizures, shall not be violated, and no Warrants shall issue, but upon probable cause, supported by Oath or affirmation, and particularly describing the place to be searched, and the persons or things to be seized.

Amendment 5
No person shall be held to answer for a capital, or otherwise infamous crime, unless on a presentment or indictment of a Grand Jury, except in cases arising in the land or naval forces, or in the Militia, when in actual service in time of War or public danger; nor shall any person be subject for the same offense to be twice put in jeopardy of life or limb; nor shall be compelled in any criminal case to be a witness against himself, nor be deprived of life, liberty, or property, without due process of law; nor shall private property be taken for public use, without just compensation.

Amendment 6
In all criminal prosecutions, the accused shall enjoy the right to a speedy and public trial, by an impartial jury of the State and district wherein the crime shall have been committed, which district shall have been previously ascertained by law, and to be informed of the nature and cause of the accusation; to be confronted with the witnesses against him; to have compulsory process for obtaining witnesses in his favor, and to have the Assistance of Counsel for his defense.

Amendment 7
In Suits at common law, where the value in controversy shall exceed twenty dollars, the right of trial by jury shall be preserved, and no fact tried by a jury, shall be otherwise re-examined in any Court of the United States, than according to the rules of the common law.

Amendment 8
Excessive bail shall not be required, nor excessive fines imposed, nor cruel and unusual punishments inflicted.

Amendment 9
The enumeration in the Constitution, of certain rights, shall not be construed to deny or disparage others retained by the people.

Amendment 10
The powers not delegated to the United States by the Constitution, nor prohibited by it to the States, are reserved to the States respectively, or to the people.