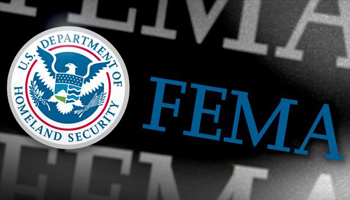 FEMA Sets Up Camp in Indiana and Beyond

The Federal Emergency Management Agency (FEMA) has been incorporated into Homeland Security.  In 1974, President Jimmy Carter issued an executive order which allowed FEMA to spring into action.  Not a new agency, they have been gaining more mainstream attention since the September 2001 attack on New York City.  So much has happened since then and if you’re not a complete ignoramus, you should know about a few things.  Try to keep up:

HERE’S WHAT IS GOING ON

FEMA is associated with Federal disaster relief and is now the most powerful organization in the country.  Some people have referred to FEMA as the “secret government” of the United States, and rightfully so.   Nobody elects the people who run this organization, and there is no disclosure of practices or policies to the public.  What’s more: FEMA works with a quasi-secret budget that is estimated in the billions and is backed by the Federal government.

FEMA technically has more power than the President and Congress; it can defer laws, force entire populations to relocate, and even has the power to detain citizens under arrest without needing a warrant.  Once under arrest from FEMA, you are not privy to a trial, and they can seize your property and food, disrupt transportation systems, and completely surmount our Constitution.  And just in case that doesn’t make you shutter, you would be scared shitless to know that FEMA has recently purchased 1.6 billion rounds of ammunition – and lots of these are hollow point rounds, which are forbidden by international law for use in war.

As I discussed in the beginning, FEMA is now a part of Homeland Security, which must be the explanation behind the recent purchase of 2,700 military tanks (or more specifically, Mine Resistant Ambush Protected, or MRAP, vehicles) – they claim that they are for ambush protection for serving warrants unto houses and businesses.  These vehicles are bullet proof, drive on puncture-proof wheels, and come loaded with gun ports so shots can be fired without anyone having to leave the vehicle.  These tank-like vehicles are being brought back from deployment in the Middle East, and the main jurisdiction is for within the United States, starting with New Mexico and West Texas.  The Department of Homeland Security is only securing themselves, ladies and gentlemen.  Watch this video if you are a skeptic.  It gave me chills.  Especially when you consider the FEMA’s contingency plan suspends the Constitution in the event of an emergency.  Do you see what is happening, folks?  Why aren’t all these people in jail for treason, or at least gotten rid of for trying to instill tyranny?

That’s not all – those inside the vehicles will have plenty of ammo to use.  Five private U.S. companies, including massive government contracts therein, purchased a shit ton (900 million rounds to be exact) of ammunition from Russia.  Russia still remains firm on their opposition to join forces in the One World Government that is being propagated by the international organizations that run FEMA.  In essence, the government purchased ammunition via outside sources to secretly feed to FEMA (hence the recent merge of FEMA and Homeland Security).

If you didn’t think this shit existed, you should feel stupid now.  How can Russia be against something that doesn’t exist?  In fact, Russia is getting a little sick of the pressure from the U.S., and has been joining forces with China to develop new weapons systems that are aimed at the United States.  And, as everybody knows, China is one step away from calling in all its debts against the U.S., which would not only cripple us, but leave us susceptible to their armed forces like a bunch of little girls.  Meanwhile, our President has signed a new ill-advised arms treaty, forgetting this little fact, and the fact that Russia is packing some big guns themselves.

FEMA USES THEIR QUASI-SECRET BUDGET TO BUY LAND FOR CAMPS

FEMA is also buying up land, and structural property.  The following is a quote from the Property Insurance Law Blog, published by the Merlin Law Group:

Beech Grove, Indiana is home to one of the many establishments that are owned and operated by FEMA – and it looks like a concentration camp.  The grounds are encircled by fencing that has barbed wire pointing inward at the top – so nothing, or nobody, can escape.  There are over 800 of these in full operational mode reported in the United States.  This brings up several questions as to how the Federal government and FEMA plan to use the establishments: natural disaster relief or purposely-caused disaster restraint?  There have been items observed by numerous people that appeared to be coffins being transported by the thousands into the establishments all over the country.

FEMA is responsible for establishing the program, Rex 84, which has at least 12 locations where “labor camps” have been set up from old military bases, and have been used recently to detain illegal immigrants.  Your feelings towards immigration have nothing to do with it.  These people were captured and detained by FEMA, and military bases were used as labor camps.  FEMA is not for disaster relief if it is imprisoning people who are supposedly committing illegal acts against the United States.  What’s more is some of that ammunition I was talking about was purchased by Immigration and Customs enforcement (the nation’s second largest criminal investigative agency).  This means FEMA is obtaining weapons from the enemy, and using them to operate an agenda put in place to secure the Federal government against those who are against it – building labor and concentration camps.  Meanwhile our President is pissing off the people with all the weapons.  There is about to be a big disaster and we are about to be the sheep herded into that fence; mark my words.  I am not crazy, folks.  You are crazy if you let the U.S. turn into the new Nazi Germany.   Attorney General, John Ashcroft, proclaimed that U.S. Citizens are “enemy combatants”.   Put that in your pipe and smoke it.

Every camp has railroad access which leads in to and out of the establishments.  Beech Grove, Indiana’s establishment was, at one time, an Am-Track station.  They are all under constant surveillance and are heavily guarded by use of posts appointed in strategic areas.  It is understood that nearly all of these facilities have a capacity expectancy of 20,000 people or more.  Airports are located close them as well.  I find it particularly disturbing that these people, the disaster relief organization that successfully convinced hoards of displaced citizens of the Katrina disaster into The Super Dome, did so under the guise of disaster relief.  I think if you know about HAARP, you could almost call yourself a conspiracy theorist if you too believe this may well have been a drill for the future FEMA agenda.

A list of executive orders given to FEMA has some very disturbing connotations:

It seems that controlling the media, transportation modes, utilities, fuel, and food is a great way to take control of a suffering country at an economic or ecological downfall . . . or terrorist attack (queue suspenseful music).  There are many other orders that basically allow the FEMA organization to suspend the American Constitution and the Bill of Rights as we know it.  Liberties are being taken away daily, and a lot of the times right under our noses.  We are on our way to Hell and we are asking for it by doing nothing.  Ask yourself: why would a disaster relief organization need these powers?

This isn’t the fault of the government; this is the fault of the American People.  The American People hold the power and should have never allowed the government to get this far – playing Big Brother, invading our privacies, terrorizing our freedoms, and implementing fear into society.  How long do you want to live with somebody else controlling everything, even mainstream media, as they do?

Many Americans fear that the Federal government will fabricate a deception and use it to assert Martial Law and restrain loyal citizens into these concentration camps.  This is a concern that goes back years, and was widespread throughout the militia movement in the early ‘90s.  Need I ask that it be a major concern in modern times?  I don’t know about you, but I’m no good for a labor or concentration camp.  If we don’t remember history, then we are bound to repeat it.  It is time we open our eyes before we are looking out from behind a fenced in labor camp.