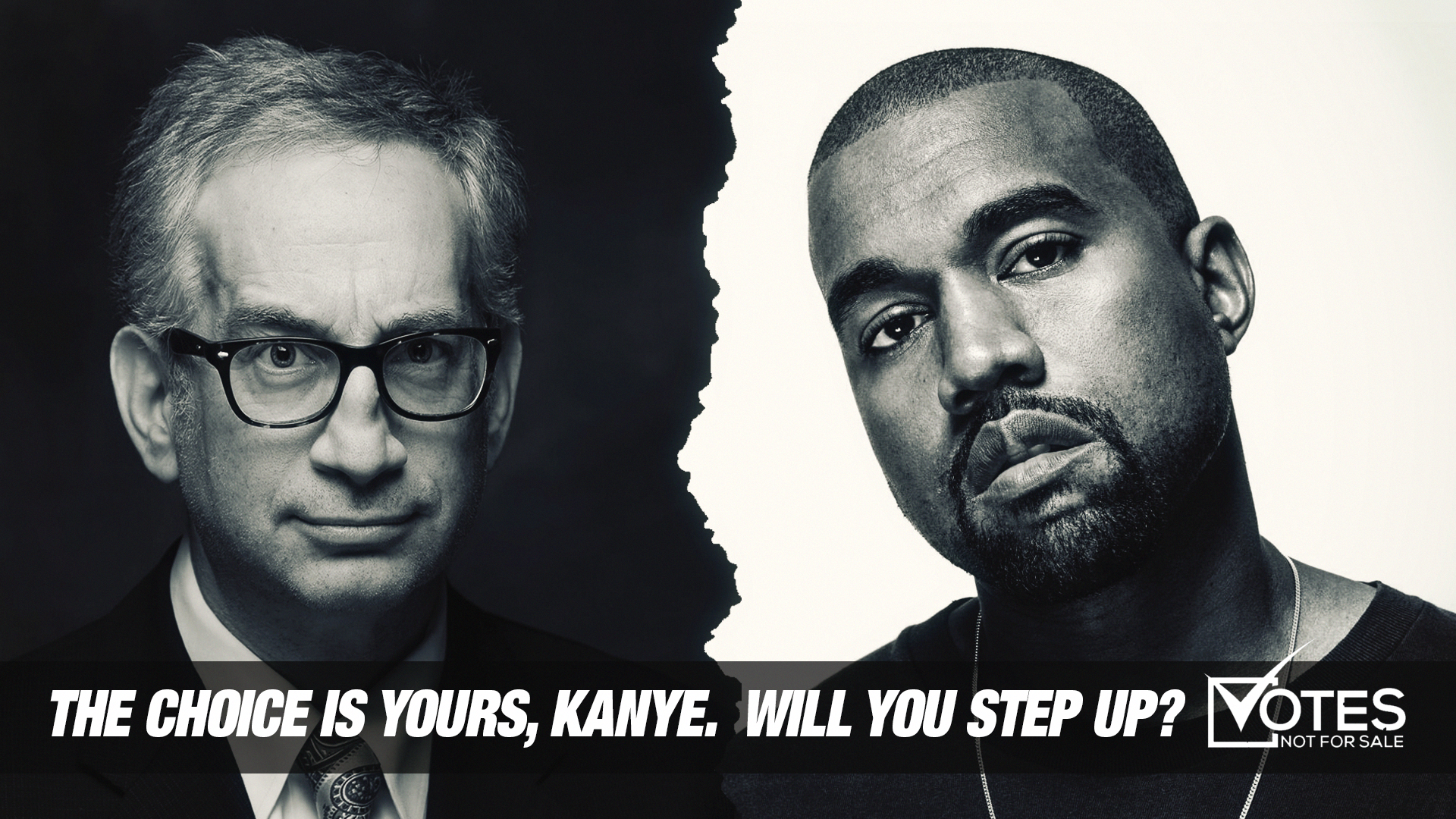 Kanye West, Be My Running Mate, 2016 Vice President of the United States

Big money has corrupted politics. The Democratic and Republican parties will each spend billions of dollars on the presidential campaign. Our two-party system is failing. The government of the United States no longer represents the people of the United States. Now is the time to take power back from the special interests. We can fight the influence of big money in politics the same way we fought the influence of racism – stop voting for it!

I accept campaign contributions, but only from individuals, not PACs, with a maximum total of $5 per person. That is why my campaign is titled Votes Not For Sale. A candidate always represents his largest contributors. I want to represent people who can only afford to donate up to $5.

The biggest obstacle is to convince the 100 million non-voters that they are worth representing. These 100 million are mostly people who struggle in life. These are people who know poverty, discrimination, and devaluation. They did not get far in school. They don’t have a good steady job. They know what it’s like to have to borrow money from family and friends just to pay the bills.

My mission is to convince the 100 million non-voters to believe in themselves, to stand up for themselves, to let me represent them, to use the power that is in their votes and not waste it in frustration. I don’t think I can do that alone. I can make a logical argument that comes from the brain, but I need to inspire their hearts. To do that, I have to speak the language of the heart. That is the skill of the artist. I need to find someone with that skill, who is serious about his art. That is what I saw when I heard your speech, Kanye West.

Maybe I made a mistake. Maybe your speech was just part of the show. Maybe it was a joke. If it was, then I am sorry, I fell for it. But if it wasn’t, if you were for real, then let’s do this – for real. If you are serious that you want to run for President in 2020, there can be no better preparation than to run for Vice President in 2016. My campaign is primarily through social media, through the Internet, and through word-of-mouth grassroots networking. I don’t want your money. I don’t want your time. What I need is your voice.

I need a running mate with the power to communicate that message of self-esteem, that message of empowerment – not just for certain people, people with a certain amount of money, but for everybody. Be my running mate and we can win the Libertarian nomination and we will be on the ballot in all 50 states. Kanye West, will you step up? If your grandfather were here right now, would he let you back down?