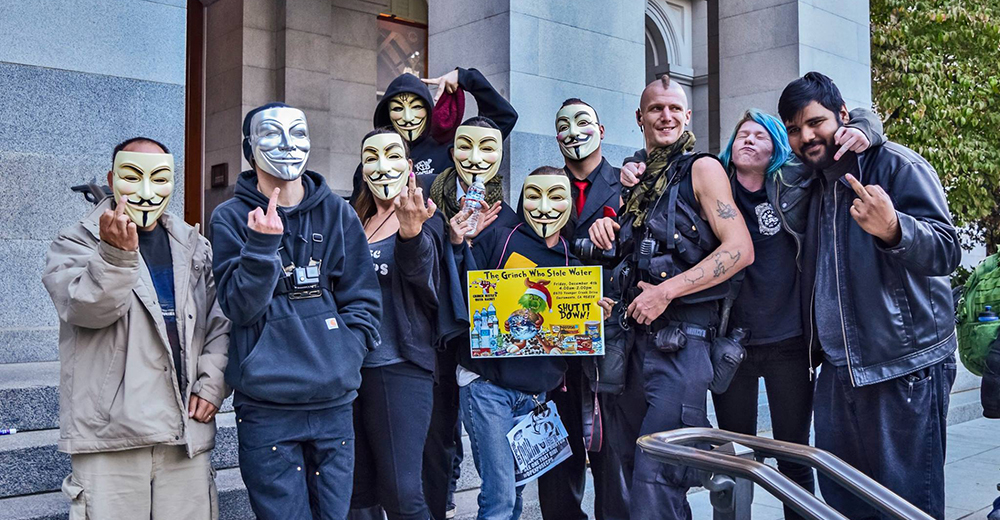 This is my first article, please bear with me.

November 5th is always a day to remember. Ever since the infamous gunpowder plot was foiled 410 years ago in England. However, in recent years it has taken on a whole new meaning. Today people around the world come together in peaceful protest in hopes of reforming the world we now live in, many of them sport the mask of Guy Fawkes from the film V for Vendetta.

November 5th 1955 is the date which doc Brown invented time travel in the hit movie Back to the future, which came out in the late 1980’s. Fast forward to the year 2015 which is set in the film’s future and now that movie is in the spotlight, yet again. We question why we don’t have Hover boards? Flying cars? Power laces on our shoes? it is for many, the same reason why people come together on 5th to protest that we are being held back by old and out dated ideas which we cling to as a society.

This year I spent my day in the capital city of California with a small group of people all from different walks of life, race, color and creeds, marching around Sacramento. The morning was cold and the down town streets were packed with cars and bikes of people on their way to work. As I got closer to the Capital building, I could make out a few people on the North side steps sitting there hoping and wishing more people would show up. Hoping that they can show the world that more and more people are feeling the shift in weather and change. A change in the force towards a better tomorrow and safer world for their children and ours. The people who I met on the steps that morning had been there since 5 am and had taken all the right steps to insure this protest would go off peacefully and legally as well, permits had been approved months in advance, even though all forms of protest are our right as stated in the declaration of independence and our Bill of Rights. In recent years, even protest in front of the White-house have been stopped, only being permitted in “Free Speech Zones” miles away from the White-house. The people I met there were extremely well informed on our rights as well of the issues, most of which place us all in danger of losing all of our rights and/or ending up in FEMA camps, waiting for a quick death and ticket out of the world and into the next.

As the morning began to warm up slowly but surely more people began to flock to the steps. Many were wearing the mask of Guy Fawkes, having brought out signs and banners as well as water and pastries to share with the public. On the South side step of the capital was a huge planned news spectacle which had big name key speakers and free t shirts. Many charter buses came in from colleges around the state packed full of only black college students for the black lives matter campaign; along with news crews from all the major media outlets. This year many black people have been killed by police, when some of our protesters when to check in with this other protest they were instantly called racist and KKK members by the Black lives matter protesters, so instead of being where they were clearly not wanted they returned to the North side steps of the capital building to let the others know what had happened to them, the now bigger group of demonstrators started to giggle and shout out “all life matters”. After the DJ finally was picked up and delivered to the steps and the music started playing over the sound system, signs were in hand with banners in tow. This small but loud group of protesters headed out to march around the capital city. They stopped at many places mostly occupied by government office and big corporate offices of banks and the drug industry.

As we started heading down the road to happy destiny in an attempt to show the powers that be (TBTB) we are indeed ready for a vast and sweeping change for this nation in hope of a better tomorrow, once and for all. As we marched down the down town streets of the capital city, we made many stops along the way of the Million Mask March. The first stop was the corporate office of Monsanto, a company that owns the right to just about every single seed that is planted in this country and many abroad as well. It is a scary thing when ones stops to think that the company that makes are food is the same corporation that first got famous for making Agent Orange and Round-Up. Agent orange was made in the mid 60’s for killing all the plant life in the jungles of Vietnam, millions of soldiers who fought in one of the worst wars of the modern age have had really bad side effects which include birth defects in their children, who have grown up horribly wounded from the chemicals in their parents blood. As we stood out front they passed around a bullhorn for those who wish to speak on the matter of how Monsanto has the world locked into buy their products. One major point being, that it’s illegal to save your seeds from your own crop so that you can plant them next year. Many family farms around the nation have been raided like meth labs all because of the want to save the seed from the crops they spent a whole season growing, to only have their family thrown on the floor like simple criminals.

After that we marched further down the road to the federal courthouse. Once again people were afforded the time to speak out against the federal government and all their wrong doings, mostly against all of the people that were elected to serve and look out for our best interest; but instead they only line their pockets and those of the ones who fund their campaigns for re-election. Next we hit all of the big corporate offices of Wells-Fargo and Bank of America. Once in front of Wells-Fargo they blocked the doors, then some suit and tie types popped out of nowhere and started asking us what we were there for? Next they started trying to tell us that if we only worked harder in life we would have a better job. That we would not be out here marching out here in the streets. This man had perfect teeth and an nicely pressed suit with oddly dirty boots, he confronted us like this was his building, as if he was really upset that we were protesting his company and proceeded to bash us constantly putting us all down again and again.

Our last stop on our march for the day was city hall, our numbers were small but we were loud and proud. Proud that today was a day that we could be heard. After a few minutes of speaking out in front of the city hall, we made are move and walked right in the front doors without a single problem. Once inside we began to chant for the Mayor of Sacramento to come down off his high horse and address us the people. People who elected him to serve us and protect our rights as Americans, in simple terms life, liberty and the pursuit of happiness for all. As we started sitting on the floor of city hall pleading for our elected officials to come down and address us, many people walked by us pointing and giggling like little school girls. When we asked some questions they bowed there head, looked the other way and went about their day as if we were never there. During this time as we wait for the Mayor, a young girl stepped up and began to speak on the subject of her cousin’s being taking away at gun point by the police. They were called by their mother to help with a problem at her home. Since that day she has not seen or heard from her family members. After it became clear that we would not be heard and our elected official wouldn’t talk to the people, we stood up and left without any problems by the city hall guards or the local police department.

We began our way back to where this day had started out at the north side steps of the capital building. We stopped for a few photo ops and when we made it back to the steps the sound system that was already being setup and DJ up on the steps playing music of the resistance.