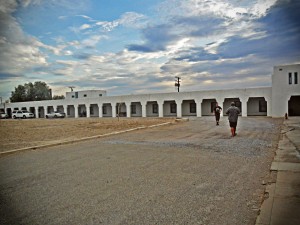 The lowest, hottest, driest area in North America is Death Valley, Ca. This place is miserable by God’s design, so it’s not that surprising that nobody lives out there. Sure it’s historically significant for Native American tribes and is the lowest place on Earth, but it’s also called Death Valley for a reason.

Death Valley Junction, CA has an unofficial population of 3 people (that’s not a typo, it doesn’t even have a car load), no gas station, no nothing, and oh yeah, it does have a haunted hotel.

Of course a place like Death Valley, called Death Valley, dealing with death would have a haunted hotel. Of course death would find his way into every little nook and cranny of man’s quest to inhabit the welcome mat at Hell’s door.

The Amargosa Opera House and Hotel has a history that dates back to 1923. Built for travelers, miner’s working nearby at the borax mines, and any other way word wanderers who happen to “appear”. Rented and eventually owned by Martha Becket since 1967, visitors have included Ray Bradbury and Red Skelton. The history actually goes back further for that cursed plot of land, dealing with the tents and camps set up for the mining operations before the Hotel complex was actually built.

My wife has a love of all things Halloween-ish, so when some friends asked if we were interested in driving out there and staying a night at the hotel, she wouldn’t let me talk “us” out of it. I had never heard of the place, but it’s world famous (many foreigners were patrons the night we stayed, but not sure if they knew the haunted aspect of it) and has a track record of paranormal activity. It’s easy to find since its’ nearly the only thing out there, one of three buildings and right down the street from the town cemetery – yep the cemetery, you just can’t make this stuff up. We arrived, settled into our rooms and as the sun went down, enjoyed a BBQ in the desolate and quiet dessert. We lucked out and had a cool spell the week we were there so it was only 105 degrees, not the 113-115 it normally was.

Half the hotel is in shambles, decrepit, falling apart and forgotten. At one time the hotel complex included an infirmary, general store, post-office, and other various community service like offices. There has been some restoration done to the facades, signs, and the few hotel room deemed habitable. Although these restoration efforts have cleaned up the hotel, it’s still genuinely creepy. “Did you see that Ouija board in the back of that abandoned car?” asked Armando, during our evening walk. While walking around the entire property, there is boarded up rooms, closed off sections, and gutted, vermin invested areas. The most haunted area is called Spooky Hallow and they weren’t allowing anybody back there when we visited.

The truth is stranger than fiction and this place is what Hollywood Horror flicks can only fathom to recreate. The only thing missing was an Innkeeper with a hunchback or missing eye, or escaped asylum inmate from “up the road a spell” or some other cheap plot device used in thousands of B-rate horror movies.

Our group was curious about the paranormal but wasn’t there ghost hunting with equipment. Although we never had any solid encounters, both me and my wife had odd occurrences. I had 6 or 7 dreams/nightmares throughout my scattered sleep that were directly related to the hotel and other worldly beings. Like someone trying to climb into bed with us, or groups of people outside our room making all kinds of ruckus. One dream involved a circus made up of many un-human type characters who were dancing in my room and coming from secret doors or hatches, and then disappearing just as quick. Not pure haunting’s but after the first couple, I started feeling a little violated on the spiritual level. My wife woke up several times with a shadow standing over her. One time she thought it was me and told it to get back in bed before fully realizing I was already next to her.

Once we got home and did a little research on the place, we found out that two popular ghost hunting shows had been there and filmed episodes. One went directly into the past history and had some compelling information about the hotels past “guests”. But this story isn’t about the shows, it’s not about what was on TV, it’s what is out there in the middle of the dessert and available for us Americans to venture to, if you so dare. For further information about the TV shows and more history on the Amargosa Opera House and Hotel, go to it’s website or see Wikipedia.

I was glad we didn’t see those shows before our trip because there could be some vile entities looming around that place, some I wouldn’t want to meet in a secluded alley and the Amargosa seems to have plenty secluded and dark areas. I’m not sure if I would have been able to relax at all or even get the little sleep I got knowing what might be roaming the halls.

The Opera House itself is an interesting aspect of the hotel, originally built for entertaining guests and workers. Refurbished, painted murals, old-style theater seats, and stage area was completed by Martha Becket in 1974. Up until 2012, she also performed a weekly play, often performing whether there was an audience or not. That may seem a little odd, but even if there were no living audience members, I’m sure Martha was entertaining others one way or the other.

For the macabre, deprived, or just plan curious, this piece of wild-west history is worth checking out. There are no TV’s, no phones or internet, and the workers drive in from nearby Pahrump, NV. Plenty of quiet, up-plugged time to wonder if what you’re seeing out of the corner of your eye was real or not.