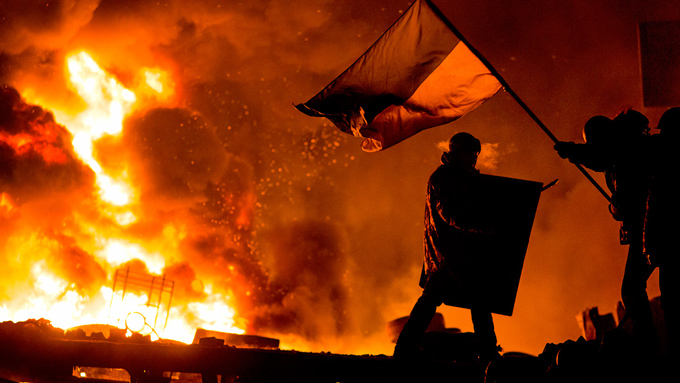 Over One Hundred Dead and Counting

By: Yuriy Kopets & Bryn Sil Vous Plait – The pitch black smoke is intense, reflecting the severity of the situation. Fires are burning, barely controlled. The tires fueling it beneath are melting, burning ferociously, and more are constantly thrown in, to keep the black wall of smoke from dissipating. This wall is nearly impenetrable, and is all that separates the front lines of two violently opposed parties.

It is 22nd of February, 2014, I am breathlessly gazing into live camera feeds on my laptop screen, cameras that are set up around Maidan Nezalezshnosti, or Independence Square, located in the heart of Kyiv, capital city of Ukraine. On my side of the screen it is 9 in the evening, in Maidan square, on the other side of the world, it is 10 in the morning.

The people located on the Independence Square gathered in opposition to the corrupt government of Ukraine. They are all volunteers: soldiers, fighters, doctors, journalists, and many other people gathered to lend any support that they can in an effort to aid the cause in which they all strongly believe. There are between 400,000 and 800,000 souls, dedicated to liberating this nation from the grip of corruption, by any means, if necessary. On the other side of the wall of opaque smoke and fire is the battle front between the opposition forces and the Berkut, battalions of Ukrainian riot police. Though it began with earnest chanting and hand written signs can be, by this point, hardly described as peaceful anymore.

On the camera feeds, I observe a large stage, with loud speakers set up all around tall poles within the Square. During times of battle, commanders step up and broadcast orders, plans of action that need to be taken in order to win the war against Yanukovych, an unlawfully elected president of Ukraine, his tyrannical troops, and the threat to a widely cherished nation these figures represent.

“We have gained control of the higher ground located on Hrushevskoho Street. Hold your ground Sotniky, do not excel further! There are snipers! We have already lost three of our guys!”

As the announcer says this, the commentators in the news station zoom in on a particular spot of the wall of smoke, out of which emerges a light-brown haired woman with blue eyes, wearing a white shirt over her jacket, displaying a big red cross on both sides of the shirt, indicating to everyone that she’s a medic. This medic is rushing out of the flames and smoke carrying the one end of a stretcher with another medic at the rear. On the stretcher lies a sotnyk, an injured volunteer fighter.

Commentating on all this are professional news-people, recording and narrating these historic events for posterity.

“Another injured fighter is being taken out of the front lines,” he says, “(expletive), he’s not breathing. My God … ” His candid, unedited remarks indicate his shock, and the camera zooms in on the lifeless body of a young man, aged somewhere between seventeen and twenty-one years, as his pale face and head slumps to the left of his lifeless body. I’m taken aback, shocked, and horrified as I look into the empty eyes of a person who was breathing just several minutes ago, someone who carried in their heart an intense vitality and extraordinary drive, as he now lays there with a cold, directionless gaze in his wide-open eyes. Medics attempt to resuscitate him for what feels like a very long time, but to no avail. Two others take a Ukrainian flag and gently lay it over his dead body.

“Shields! Sotniky, for those of you who need a shield, come to the second sector on the upper end of the square. We have received a new supply of shields!” announces an volunteer commander. The camera zooms in on this location on the upper end of the Independence Square, and visible is a stack of shields. Some are homemade, and some have clearly been confiscated from the antagonizing riot police. I can also see the lines of battered, tired, yet intensely energized fighters waiting to be issued these shields by helpful female volunteers. Each fighter is visibly dedicated to maintaining their spirit and energy, anticipating their run back through the black wall of smoke, straight into the fray, anxious and eager to keep up the pressure, and to continue the fight against Berkut. A fight, which began with slogans, but due to the deaf ears, and iron fists of the authorities, has escalated to using weapons like slingshots, molotov cocktails, and bricks torn up from the streets of the very square these spirited fighters have dedicated themselves to defending, some with their very own precious lives.

During periods of relative tranquility between these outbreaks of fierce battle, a majority of volunteer fighters retreat to the center of Maidan Square, near the stage. Meanwhile, a few soldiers remain in the other side of the wall in order to provide the presence necessary to hold on to newly captured territories. They approach, one by one, and pass a microphone along the line to tell their heartfelt – and sometimes heartbreaking – stories, to share their sincere opinions, make other aware of their recent observations, to sing a song, or share anything that burdens their minds in an effort to strengthen the morale of the battered freedom fighters. Sharing this inspiration and information is integral in weaving together these scared, but committed, these ill-treated, but not beaten, and the hurt, but helpful individual hearts and minds into a cohesive, efficient, and unbeatable force for freedom and growth. Occasionally, a Ukrainian folk anthem takes shape, and rings out from the speakers across the square, as thousands of devout patriots gather together to sing along with all their hearts.

“Shche ne vmerla Ukrainy, (“Ukraine has not yet perished,)

i slava i volya. (nor her glory, nor her freedom.)

Seeing and hearing all of this from the relative comfort of my American home, I was overcome by emotions. I felt deep sorrow for the profound losses suffered by the families of the volunteers who gave their lives for this cause. I felt guilt that this struggle was unfolding a world away – in real time – as I watched unable to lend my efforts, though my heart longed to share my own support. I felt pride that the citizens of this nation refused to accept the bitter humiliation of living under tyranny, that they are unwilling to passively accept the perverse, manipulative, and abusive practices of a corrupt regime that cares only for acquiring and maintaining power for its own sake, even at the cost of the lives and liberty of everyday people. I felt inspired that the trend of humanity – in every corner of the world – to move towards greater liberty and abundance cannot ever be stopped, only delayed by delusional despots.

I also felt very, very tired. After watching this all unfold, the early hours of the morning (on my side of the world) snuck up on me. I had been unable to tear myself from this news coverage, and the needs of my daily life had not ceased to exist, despite their relative insignificance with regard to this timeless, historical struggle happening on Maidan Nezalezshnosti.

I stretched, and shook the sleepiness from my mind, aware of the obligation in my own life, but still unable to put the monumental events across the planet from my thoughts. As night fell over Independence Square, and each side settled into defensive mode, and readied themselves for another day of furious combat, and another day after that, if need be – as long as it takes.

In the end, hundreds of souls passed from this world during this struggle, but their sacrifice was not in vain. Within days, Yakunovich fled the country and his palace was overrun by those opposed to his corrupt administration, and plans were soon drafted to turn it into a museum, open to the public to preserve the memory of how intolerable his government was, and why it had to be overthrown. Elections were held in the parliament building for a new president, freely elected by the people of Ukraine, and committed to a fairer, more just system.

A chant, with thousands shouting in unison, “Slava Ukraini! Slava heroyam!” rang loudly through the speakers over the square, across the crowds, and onto the television screens and radios broadcast out to the rest of the free world.

“Glory to Ukraine! Glory to the heroes!”