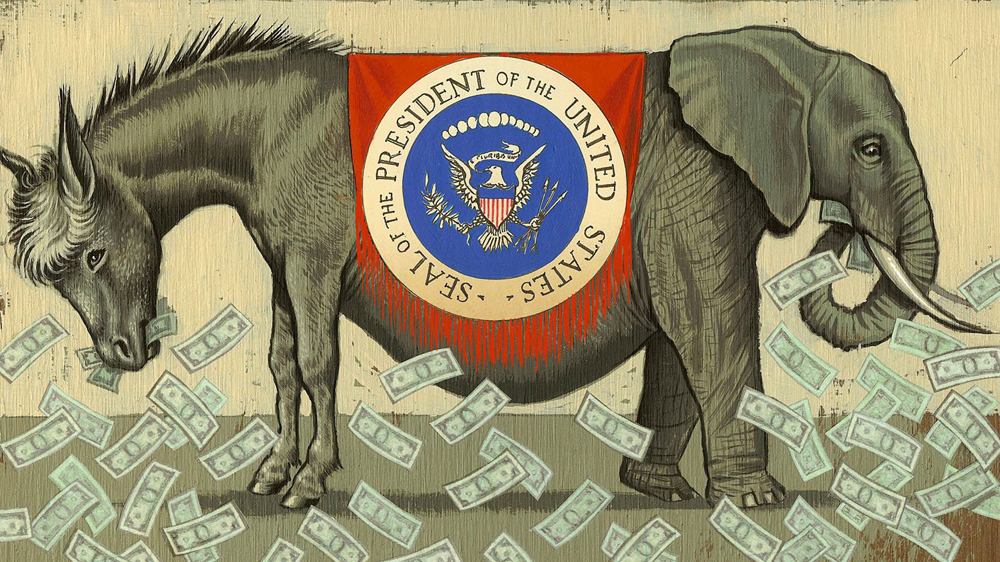 Opinion: Why I do not vote…

The U.S. 2016 Presidential election is still months away but as of February nearly every major media outlet has daily coverage of both the Republican and Democratic races. As someone who chooses non-voting on principle and strategy, the constant examination of any and every aspect of the election causes a perpetual case of throw up in the mouth.

Despite (or because of) my distaste for electoral politics I feel the need to constantly remind my social media network that I believe there are vastly more important and empowering ways to spend your time and energy than voting for a president. This is not only part of the strategy of spreading anti-state and pro-empowerment rhetoric, but seems more important than ever this election cycle because Americans are divided in their support for candidates that seem like polar opposites but are actually both seeking to use the power of the State to achieve their goals.

Every election cycle the deadstream media fills first-time voters heads with propaganda designed to make them feel like they are changing the world. There is an abundance of “Meet the new generation that is changing the presidential election” and similar headlines. I understand this process because I experienced it when I was a new 18-year old voter in 2004. I was thoroughly anti-Bush and anti-War. In my hatred for Bush I was told to believe that a vote for a Democrat (John Kerry) would remedy the situation. Of course, Kerry lost but even if he had won it would have not changed the course of the country in any significant way. At least not in any way that reduces the violence that is inherent in the State itself.

Another important reminder: the last generation that supposedly “changed the world” via the presidential election gave us Obama, who gave us more war, more surveillance, drone bombings, continued robbery by the banksters, and some would argue that electing a Democrat (especially the first black president) pacified the anti-war movement that was reaching millions in the early 2000’s.

This is, of course, if you actually believe that presidents are voted in. I have said it before – presidents are selected not elected. You are not truly electing a president. We could say the electoral college elects presidents and the popular vote does not matter. We could also say diebold (and other) voting machines are easily hacked and rigged. And based on how the Republican and Democratic establishments treat “outsider” candidates it has become clear that no one will ever become president unless they have agreed to toe the party line.

To my friends and family who are supporting Bernie Sanders, I want to say that I empathize with you. I cautiously (and quietly) supported former Congressman Ron Paul’s attempt to spread the ideas of libertarianism through his presidential campaign in 2012. I did not vote for or campaign for Paul but I did take the time to remind my voting friends that there was at least one candidate making sense.

Although Paul and Sanders are very different (I am more aligned with Paul’s philosophy, though not on every issue) I see the same hope in the eyes of Sanders’ supporters who want to believe that this might be the election where real change can get into office and reshape this nation.

I recently saw Sanders’ supporters picking their jaws off the floor in disbelief that Hillary Clinton could win the Iowa caucus by a coin toss. Six times. Yes, it is unbelievable but it’s reality. I expect that you guys will continue to find your jaw on the floor if you choose to believe that this system (and the people pulling the strings) will allow an “outsider” to win.

The libertarians and libertarian-leaning Republicans learned this 4 years ago when they thought that Ron Paul would be their savior. He grew the message of “liberty” and the movement but ultimately childish games and lies were employed to maintain the status quo.

You will not find me voting for these parties because it should be painfully obvious that the elections are rigged. It’s all a facade. Just think of it as sad, boring entertainment and your life will be much better off.

“But Derrick, if you don’t vote how will your voice be heard?”

“If you don’t vote you have no right to complain!”

“People died for the right to vote, if you don’t vote you are giving your power away!”

“Non-voting is childish, just because you can’t get your way you won’t play!”

I choose not to vote because it is immoral to use force (under the guise of government) to enact my particular vision for the rest of society.

Even if I didn’t have a philosophical problem with voting I don’t see a single candidate that represents my values or goals. Why should I be forced to participate or be shamed when the available options are extremely lacking?

I choose not to vote because the time (however minuscule) it takes to research candidates and vote is better spent elsewhere, namely in my own community. I find value and results when I apply my energy and passion into my local community and create solutions that empower myself and those closest to me. Although I have philosophical arguments against voting itself I do think those who focus their energies locally will find times that organizing and voting can be effective to reduce government intrusion in our lives. I absolutely do not think voting (on any level) should be used to force your particular solutions on other free humans.

I also want to stress that there is no “political revolution” taking place. You are being duped. The very idea is an oxymoron. Specifically, the idea of a an electoral revolution is preposterous. However, as Steven Horowitz has brilliantly pointed out, politics is more than elections and voting. Horowitz writes:

“When we write a letter to the editor, share a story or a meme on social media, talk about US foreign policy with friends over a drink, or step into our classrooms to teach economics to college students, we are being political. Every time we engage in the conversation about what is wrong with the world we live in and how we might make it better, wealthier, more just, or more peaceful, we are being political.

Elections and voting are neither the most important elements of politics nor the sum total thereof. That’s too narrow a conception and one that even libertarians should reject. If anything, we understand correctly that voting might be the least important and least effective kind of political action.”

A true revolution – an evolution that propels humanity forward – is not going to come from the ballot box. The establishment would like you to believe such a thing is possible, that voting for a president is power, but this is actually an act of giving away your power.

However, this is not a message of doom and gloom. This is a message of empowerment. YOU ARE POWER. The moment we stop giving away our power and believing that this system offers us any hope for a better future, the sooner we can embrace and heal ourselves and our communities. From there we will flourish.

When I talk about Anarchism and stateless societies as a solution to the crimes and failures of the State and our current condition I am often asked how we can get to an Anarchist society or if it would even be a preferable alternative. I do not necessarily believe in making prescriptions for what an Anarchist world might look like (especially because none of us will know until we build it) but I do believe in a particular strategy to get there. I believe part of the solution lies in Agorism and Counter-Economics.

Agorism and Counter-Economics are strategies to reduce our dependency on the mainstream systems of governance, food production, media, health, etc. The goal is to remove our consent from systems we do not support and to create new methods of protection, production, and growth that are based in local communities.

Please do not assume that non-voting, and removing yourself from the system means apathy or failure. By removing ourselves from the systems we do not support and building new alternatives outside of the State apparatus we are creating the world we want. We need propagation of this message as much as we need creation of Agorist alternatives to the Statist economy.

In addition we also need active non-compliance, resistance campaigns at every level, on every front. I believe Agorist methods and the creation of pockets of Agoras (counter-economic exchanges) and Freedom Cells (organized collectives of 8-10 people focused on sharing skills, and educating each other on sustainable methods of living) are at least part of the solution towards a better world.

I am not simply preaching from behind a computer screen. These are real world strategies that I plan to employ over the coming years. Here is an outline of my goals for the next few years:

Step 3: Land experiments, reclaiming abandoned lots, putting the principles of sovereignty of the individual, permaculture, sustainability, the NAP, etc in action on a communal level.

Step 4: Practice all steps simultaneously and document the whole process. Record outcomes and share with the public.

I believe the United States is at a pivotal moment where the population may continue to play the game and put their faith in a candidate for another four years only to be disappointed yet again. My goal is not to shame those who vote but to encourage each of us to find ways in which we can directly engage and empower our communities rather than simply putting faith into politicians every couple years. I fully believe that we are capable of creating new systems of organization and abundance that have the potential to completely radicalize our experience of liberty.

If you are interested in these ideas please contact me. If you want to know more about this please watch this interview with James Corbett of The Corbett Report. You can also read my book for more of my ideas on solutions.