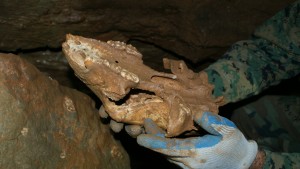 There is a popular saying around here that goes, “There’s more than corn in Indiana.” However, many bored citizens find that the state is a rather ordinary place to live most of the time. Well, now residents can get excited about something truly unique in what some paleontologists are now calling “the most significant bone find in state history.”

The recent discovery of prehistoric bones in the caves of southern Indiana definitely has people talking. At the 9th largest cave system in the country, Indiana Caverns, thousands of animal bones are being carefully excavated from the site. The caves contain the remains of several different extinct species of animal, most of them indigenous to the state. Citizens of Corydon, Indiana and the surrounding counties are now just a short drive away from laying eyes on something truly spectacular.

Making History One Square Foot at a Time

Cut out in small 12-inch by 12-inch sections, this massive cave system is still currently being searched for even more evidence of prehistoric life. Most of the bones have been found on the surface or floor of the cave, preserved in such a way as to paint a vivid picture of how the animal lived and died. In fact, there is an exhibit featuring the remains of a prehistoric bear right where it died thousands of years ago – in its fully-intact den. Seeing such a thing is a rare experience no matter where you live; but for Indiana residents it is truly something historical.

Among the other interesting bone finds include: the flat-headed peccary, passenger pigeons, snakes, porcupines, and bats. Interestingly, some of the species have been extinct for over 40 thousand years. So far, the excavation only represents about 1% of what experts think could be found in the caverns. Some locals are even speculating as to whether human remains will be uncovered as well – a discovery that would truly catch the attention of the national news.

Those who know anything about the state know that it was once a swamp; but those swamps only existed after the recession of the glacial ice that covered the region. Left behind is what we see today: rolling hills, limestone cliffs, abundant forests, and diverse animal life. The diversity of the region is still something that is being studied and understood. The discovery of the prehistoric bones in the cave will answer many questions, while asking plenty more.

The bones being found in Indiana Caverns have been trapped underground since the last ice age, a period in Indiana history that explains the origin of many of our gorgeous geographic attributes. This literal time capsule has been left undisturbed for 10s of thousands of years until the team of researchers began excavation. Of the 38 miles that comprise these caves, only about a mile is open to public access at this point, while paleontologists work to open more in the future.

As an Indiana resident, I am really excited about this discovery. Not only will it help experts to better understand our local history; but it will also lend itself to the world, creating links where there previously were none. It turns out that there is more than corn in Indiana; there are ancient bones in untapped caves, displayed for your viewing pleasure.

The next time you are feeling bored, thinking that there is nothing exciting going on around here, perhaps you should turn off the TV and go spelunking in your local caverns. You will literally be going where nobody has gone for millennia. See you there!