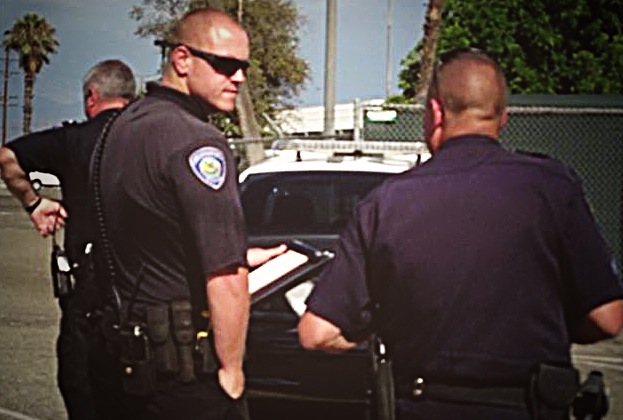 At approx. 3pm on September 5th 2013, Andrea Neyses (Save SBC Shelter Pups) was minding her own business taking photos of the urgent dogs at the San Bernardino city shelter when 2 San Bernardino city police officers walked up to her in the kennels and ask her what she was doing. She explained to them that she was taking photos of the dogs to network them on Facebook to help get them rescued or adopted. They asked her if she was feeding the dogs treats. She replied, no. They asked her if they could search her bag for treats. She did not have anything to hide, so she told them she did not mind. They made her remove everything inside of her bag and in the pockets of her shirt. After she successfully proved to them that she did not have any food on her, they thanked her for being cooperative and walked away. Andrea continued taking photos of the dogs.

Just as Andrea was leaving the shelter, three police officers rushed past her out to the kennel area. She joked around with staff that she was glad they were not there for her. She told them goodbye and headed out the front door. Andrea got into her car and as she back out of the parking spot, she saw Anita Sanchez yelling for her to stop, she said the officers were there to speak to her.

As she pulled back into the parking spot, all 3 officers walked up to her car. Officer Harvey asked her for her drivers license. She gave him her license and asked what the problem was. Officer Harvey stated that she did not leave when she was told to leave. She looked right at the 2 officers who searched her bags if they ever asked her to leave, they turned their backs to her and would not answer. She explained to them she was only there to photograph the animals, what reason would they have to ask her to leave. Officer Harvey then said that Debi Shuker claimed that when Andrea visits the shelter she does not follow the rules. Andrea asked what rules she was breaking… he said Debi Shuker said she continued to feed the animals even after being asked not to.

Officer Harvey made Andrea say in a video recording “I will follow Debi Shuker’s rules”. He said that if she refused to repeat those words, she would not be allowed to return to the shelter. They made her sign a ticket and she was allowed to leave.

Now Andrea must appear in court in November for this ridiculous ticket. The ass-wipes at San Bernardino city shelter, the police department and Debi Shuker have nothing better to do with taxpayers money in a bankrupt city then to harass Andrea? Don’t you think 3 police officers with lights flashing is a bit overboard? In a city that has the worst crime rates from murders, rapes, robberies and assaults. What in the hell are 3 officers doing harassing a citizen of San Bernardino county for being under the suspicion of “feeding a shelter dog a treat”?

*Editors Note: UCM will be contacting the SBDP and following up on this story. You can visit Andrea’s “Save SBC Shelter Pups” Facebook page here. Also check out Maria’s YouTube channel here.

Maria appeared on a radio show today check it out below.