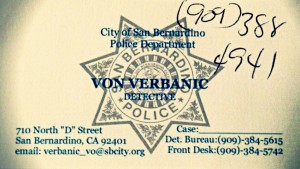 In a place where crime is high and small amounts of good moralized citizens gather to hold officials feet to the fire. Is there anything else for law enforcement to do? Do we need to question why San Bernardino is on the edge of bankruptcy? On Sept 7th 2013, Maria Sanchez contributed a story to UCM. The story was an attempt to help others understand the situation surrounding the San Bernardino Animal Shelter. Sense then the Police department has continued to harass Sanchez. Sanchez recently posted the following via her Social Network, the following…
“Yesterday, I came home and found this business card stuffed into my front door.

I wasn’t home when the San Bernardino city detective stopped by, so they paid me another visit this morning at 7am. THIRTY MINUTES BEFORE MY ALARM, may I add!

I told him I did not appreciate him coming to my home, and said if he had any questions for me, he could email me and I would forward them to my attorney.

The detective said it was about what I was doing at the shelter and what I was posting on Facebook. I reminded him that what I am doing is legal. He agreed that I had every right to do what I am doing. I wouldn’t talk to him any further, I just told him I had to get ready for work and closed the door. This visit was way out of line and I am taking it as an attempt to try to intimidate me. FAIL!

I wonder if my Mayor would appreciate his constitute being harnessed by the San Bernardino city police department, on her property.”

According to an Interoffice Memorandum dated January 7th 2013. Von Verbanic had been an acting detective since June 11th 2012, assigned to investigations. On January 8th 2013 Verbanic was promoted to the position of Detective by Chief of Police Robert Handy.

According to another Interoffice Memorandum Von Varbanic was involved in the Tasing death of a 19 year old named Frank Cleo Sutphin. Sutphin was diagnosed a Paranoid Schizophrenic. Sutphin’s medical records indicate that he has a history of anger outbursts and suicide attempts. Sutphin resided at Lehman Board and Care, Where the incident occurred.

According to some witness’s Sutphin was trying to break up a fight between another patient and his roommate over cleanliness, when Sutphin was punched in the face by another aggressive patient.

This case was covered in detail amongst the main stream media for quite some time. Most coverage due to the nature in which the Sutphin incident was handled. Upon Sutphin’s death many believed it to be caused from the use of the Model X26, Serial # X00-325422 taser gun.

Sutphin was pronounced dead at St. Bernadine’s at 0043 hours on October 17, 2009. An autopsy was performed on Sutphin on October 21, 2009, by the San Bernardino County Sheriff’s Department – Coroner’s Division, by Forensic Pathologist Dr. Frank Sheridan.

The Pathologist revealed that he felt that there was a “multiplicity of factors that led to this death and there was no way to find out the cause of death.” It would be “impossible to pin it down.” Dr. Sheridan also mentioned. “that it is not something that can be seen and we will never know. Finally, the Dr. stated that “we don’t know if the taser contributed [to the death] or not.”

Because this incident resulted in the death of Sutphin, the issue of potential criminal responsibility on the part of the officers was addressed. Verbanic and Fellow officers were exonerated in Sutphin’s Death.

It is note worthy that as of April 2013, there have been over 500 taser-related deaths in the US alone, some of them have been children.

So may we ask, why is this man (Detective) bothering one of San Bernardino city’s better citizens? San Bernardino is mentioned in the recent NYTimes article “San Bernardino wins eligibility for bankruptcy“ This is disappointing when the words San Bernardino, Bankruptcy and Win are used together. It seems that many residences of this once Mormon founded frontier land, feel it is at a big loss, if not losing altogether. Winning is defined as “The act of one that wins; victory.” Yet, most define it as being number one. Last time we checked, San Bernardino was one step behind Detroit.

As Maria awaits the response of what San Bernardino City, Mayor Pat Morris has to say about this? We shall all wonder what is next for this peaceful activist. Until then you can follow Maria’s Facebook page for updates. If the SBPD has anything to do with it… let us hope tasers are not involved.

To Detective Von Verbanic, we can only hope you take your Oath to support and defend the Constitution as what governs you into your future encounters, within your choice of work. As for now… Please treat the Lady with respect and know every action is a choice. Honor the badge.