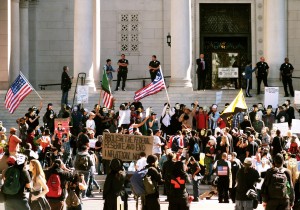 The Million Mask March (MMM) in Los Angeles complemented marches and demonstrations around the world on the anniversary of Guy Fawkes’s unsuccessful “Gunpowder Plot” of 1605.

The stated goal of the MMM-LA’s organizer, Randy Lucas, was to have a completely peaceful event starting with a rally in Pershing Square and progressing to city hall. To mitigate the risk to attendees Mr. Lucas and his co-organizers planned their event with safety in mind and the event was billed as a family-friendly environment. To that end permits were in place, participants were briefed to obey all traffic laws, and Medics were made available. One such medic agreed to an interview by Uncorporate Media.

The activist, who identified himself as ‘Dragon’, served as a paramedic in the Army for nine years and the US Marine Corps for four years including deployments to Iraq. Dragon stated that although he enjoys helping people he could no longer serve as because he was “tired of being corporate muscle.” Dragon volunteered to assist a small start-up called “Paramedics without Borders” during the Haiti earthquake relief. Mr. Dragon also shared with Uncorporate that he recently completed his Master’s in Acupuncture and Herbal Medicine.

The March continued to LA’s famous City Hall building were an additional rally was held. At this point the March met up with the “Free the Weed” party celebrating the anniversary of Prop 215 allowing Medical Marijuana in the state of California. Uncorporate had the opportunity to meet Mrs. Rich Eastman and “Free-Wheelin’ Frank himself the OLA[Occupy LA] Pirate” who were celebrating 17 years of Medical Marijuana with two large sheet cakes, live music, and the requisite pause at 2:15 and 4:20. Mr. Dennis Patron, the author of 215 also made a speech in observance of this occasion.

The activists continued to move about the city through Little Tokyo and to the federal building where they were met with the only resistance on the day from DHS. The procession returned once again to Pershing Square for a final rally.

The last march of the day was to LA Times once there a reporter reluctantly agreed to an interview so that the voice of ‘Anonymous’ could be heard in MSM and become designated at #oplatimes.