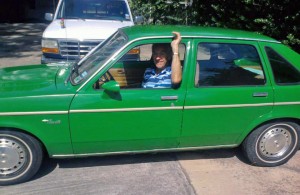 At around 8pm on Monday the 30th of September 2013. Former presidential candidate Ron Paul announced a contest via his Facebook page. Titled “Own a Piece of Ron Paul History”.

This car has a little bit of history of its own. Paul explains…

“In 1979, when I was headed to DC for my first full term in Congress, I bought a car to keep there. It was a 1979 Chevrolet Chevette. But this compact 4-door soon proved to be controversial. Tip O’Neill, the powerful House speaker, was advocating gasoline rationing for the rest of us, while he was chauffeured around in a Lincoln, all at taxpayer expense. And no waiting in gasoline lines for him, nor paying for it: he had his own pump in the House garage.

So my little car—which I paid for myself, of course—was parked next to the Tip behemoth for a cheeky photo. Well, you would have thought I was Ed Snowden. There was a huge blow-up. Tip even levied the ultimate punishment: he blocked pork-barrel funds for me, which I was not seeking anyway.

So this little car has some history to it. Yet it has only 69,000 miles on it. It was repainted after my youngest daughter used it at college, and has been garaged for the last 10 years. But it starts and runs, and is as cute as when Tip wanted to bomb it.”

The little Green Chevette made the papers all over the U.S. featuring the picture of the Chevette next to Speaker Tip O’Neils gas guzzler.

In the case you are too young to remember Thomas Phillip “Tip” O’Neill, Jr. Born in Cambridge, Middlesex County, Mass. December 9, 1912. O’Neill was the 55th Speaker of the United States House of Representatives, in office from January 4, 1977 to January 3, 1987. He was also the House Majority Leader in office from January 3, 1973 to January 3, 1977. His stay at the House of Representatives started in January of 1953 serving for 34 years. O’Neill was elected to the same congressional seat held by John F. Kennedy. He had been selected to the House Rules Committee During his second term and he was heavily involved in the Democratic leadership of the time. His mentor was congressman John William McCormack. He is the only Speaker to serve for five complete consecutive Congresses, and the second longest-serving Speaker in U.S. history. He was awarded the Presidential Medal of Freedom in 1991. O’Neill died of a heart attack on January 5, 1994.

Paul goes on to say: “And you can own it, and aid the cause of peace and prosperity at the same time. The person who makes the highest pledge of a tax-deductible donation to the FREE Foundation by October 15, 2013, and redeems it, will own this historic little vehicle. The proceeds will be used to fund the work of the Ron Paul Institute for Peace and Prosperity. That’s the one that outrages the neocons, so you know it is important.

We’ll have a nice turnover ceremony at the FREE office in Clute, Texas, that we’ll photograph, and I’ll also present you with a Congressional license plate that was actually used on the car.

See you in the driver’s seat.”